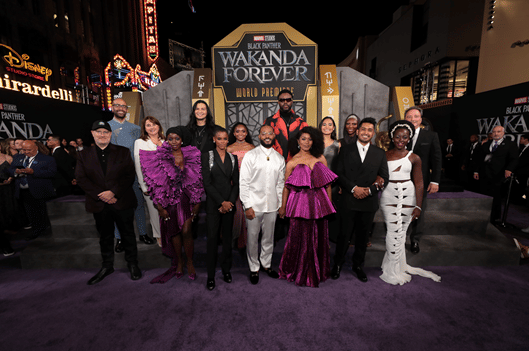 In the film, Queen Ramonda (Angela Bassett,) Shuri (Letitia Wright,) M’Baku (Winston Duke,) Okoye (Danai Gurira), and the Dora Milaje fight to protect their nation from intervening world powers in the wake of King T’Challa’s death. However, when Namor (Tenoch Huerta,) king of a hidden undersea nation, alerts them to a global threat and his disturbing plan to thwart it, the Wakandans band together with the help of War Dog Nakia (Lupita Nyong’o) and Everett Ross (Martin Freeman) forge a new path for the kingdom of Wakanda.

EUR’s Jill Munroe spoke exclusively with Moore about how much comic book material was sourced for the sequel and incorporating the strife within marginalized communities into the storyline.

Moore said a lot of inspiration comes from the comics. “Certainly with how Namor and Atlantis have found themselves on opposite ends with Wakanda. But there’s no single storyline that we pulled from. As we always do, we combed through all of the great stuff that’s been published and picked the best moments,” he explained.

“Building a sequel around a character’s passing is something we’ve never had to do before and never had to consider. It is a little bit of art imitating life to that extent. So you want to make sure it’s holistic when you’re telling a story. The movie’s themes are also dovetailing, with some of those comic book inspirations to tell one singular story,” Moore added.

In telling the story of the Talokan, bits of Aztec and Mayan history were included via language and symbols. Moore says their goal was not to be derivative in the conflict and to be as honest as possible.

Moore explained that they wanted to get into the nuance of the “why?” with the conflict.

“We wanted it to be honest to the reality, as much as it can be in MCU, of how these two nations might find themselves at odds with each other. But also telling the story of the history of colonization and how that sometimes pits people against each other who otherwise never find themselves in conflict. And I think Ryan and Joe, the co-writer, wanted to tackle that issue. And the canvas it’s on is exciting and hopefully gets people thinking about the world slightly differently.”