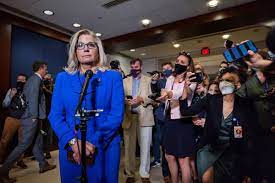 “In public statements again this week, former President Donald Trump has repeated his claims that the 2020 election was a fraud and was stolen,” said Cheney in a Washington Post column. “His message: I am still the rightful president, and President Biden is illegitimate. Trump repeats these words now with full knowledge that exactly this type of language provoked violence on Jan. 6.”

Cheney ran afoul of Trumpists because she voted to impeach the 45th president because of his activities inciting the Jan. 6 insurrection. In the Trump Republican Party, that’s a major no-no. You’re expected to go along with all of Trump’s lies, such as his Big Lie about election fraud. Because of that, Cheney looks like she’s going to lose her rank.

House Minority Leader Kevin McCarthy (R-Calif.) initially criticized Trump for his incitement of violence, but he later came to heel and recognized Trump as the unofficial leader of the GOP. McCarthy backs Cheney’s removal and also has kowtowed to Trump and visited him in Florida.

“I think she’s got real problems,” said McCarthy in a hot-mic moment from a FOX News interview. “I’ve had it with … I’ve had it with her. You know, I’ve lost confidence. … Well, someone just has to bring a motion, but I assume that will probably take place.”

Republicans have already lined up a replacement for Cheney in Rep. Elise Stefanik (R-N.Y.) Ironically, her voting record aligns less with Trump than Cheney’s. However, she has been less critical of Trump than Cheney.

But Stefanik’s former colleagues are furious with her recent change of mind and accused her of selling her soul to the Devil, according to Time. One colleague even accused of her supporting Trump’s efforts to overturn the 2020 election.

“Trump has won the Republican Party. Trump owns it. It is the key to (Stefanik’s) reelections, it is the key to her fundraising, it’s the key to her advancement within Congress,” said Margaret Hoover, who worked with Stefanik in the George W. Bush administration. “She knows how to play it; so, that’s what she’s doing. Never mind that it’s undermining democracy. She’s made a calculation that she can rise to power by backing the Big Lie.”

Cheney’s also facing trouble back at home in Wyoming. She may lose her leadership position and also face difficulty hanging onto her seat in Congress.

Trump’s control over the Republican Party also extends to the Senate, where he still has strong supporters. For example, Sen. Lindsey Graham (R-S.C.) once called Trump a kook but is now a Trump loyalist. But Graham’s praise of Trump is getting excessive to the point of being absurd. He recently said that there was no future for the GOP without Trump.

“I’ve always liked Liz Cheney, but she’s made a determination that the Republican Party can’t grow with President Trump,” said Graham of the twice impeached president. “I’ve determined we can’t grow without him.”

However, Sarah Kendzior, a journalist, author, and scholar of authoritarian regimes, said there is a sinister reason for Republicans’ loyalty to the former president. In a Twitter post, she suggested that many of them are being threatened and blackmailed.

“The GOP are not afraid of or in thrall to Trump, the individual. They are afraid of and/or willing partners with the extensive criminal apparatus behind Trump which employs threats and blackmail to keep people in line — and offers elite criminal impunity as an incentive,” said Kendzior.