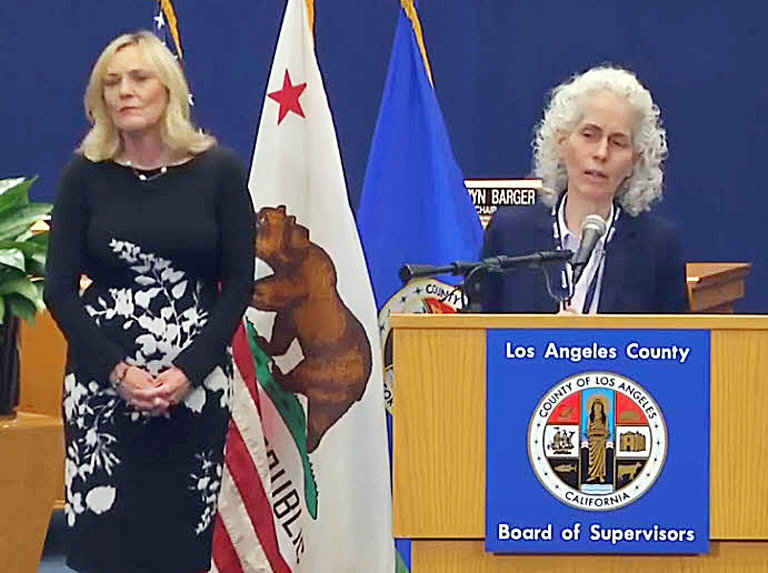 The low number of new cases spurred cautious optimism among health officials, who urged residents to stay the course on stay-at-home orders and other measures.

As the number of confirmed cases seemed to level Ferrer, the question remained about just when the county might consider reopening businesses. But so far, that answer was not easy coming as modelling was now showing more prolonged caseloads rather than a steep spike.

“I want to be only cautiously optimistic because typically on Monday we have a lag in test results because of the weekend,” said Public Health Director Barbara Ferrer.

With President Donald Trump expressing his desire to get the economy moving again by May, Ferrer said the decision in LA County would be made locally.

“I think there’s 100% agreement that the strategies about what happens locally need to be determined by conditions locally,” Ferrer said. “I know the president is really anxious for us to reopen. Everyone knows that reopening is going to be staggered and we’re going to make sure what we don’t do is act in some haste that causes an increase in cases and most importantly the number of deaths.”

“I know that so many of you are experiencing a profound loss and you’re mourning family member and friend who died from complications from COVID-19,” Ferrer said.

More than 28% of the deaths, 92 people, were residents at long-term care facilities. A total of 185 institutional settings now have cases with a total of 1,372 cases among staff and residents at nursing homes and assisted living facilities.

A total of three deaths have now occurred among healthcare workers. They also accounted for 787 confirmed cases. Nurses represented about 33%, doctors 9%. Roughly 43% worked at hospitals, 19% at long-term care facilities and 12% in outpatient settings. About 60% did not know or report on their source of exposure, Ferrer said. Those who did know where it came from said 24% were exposed through contact with a patient or healthcare worker.

“We continue to track what’s happening in our health care facilities so we can make sure our workers are protected to the greatest ability,” Ferrer said.

A total of 23 confirmed cases have occurred among people experiencing homelessness.

Monday’s totals did not include updated counts for Long Beach and Pasadena, which operate their own health departments. Long Beach on Monday reported two more deaths and 14 additional cases.

“This will be a critical week to see if we maintain a steady number,” Ferrer said.

Across the region, Orange County has reported 1,283 cases and 19 deaths, Riverside County 1,619 cases and 41 deaths and San Bernardino County 887 cases and 31 deaths.

Statewide, a total of 687 people have died from the coronavirus, as of Monday, April 13. Slightly more than 3,000 were hospitalized and roughly 1,178 people were in the ICU. Gov. Gavin Newsom said the Easter weekend did not see the influx that many people expected at parts and beaches.

“The curve is being bent because of you and your willingness to stay home,” Newsom said.

Newsom, along with governors of Oregon and Washington, announced an agreement Monday to work in collaboration in slowing the spread of COVID-19. But the agreement was more a series of principles than a defined action plan. Newsom also commented Monday on remarks he made last week referring to California as a “nation-state.”

“When you have a state that’s larger than the populations of 21-plus states combined, that gives you a sense of the magnitude and scale of the nations largest state, the world’s 5th largest economy,” Newsom said. “Our purchasing power allows us to do things.”