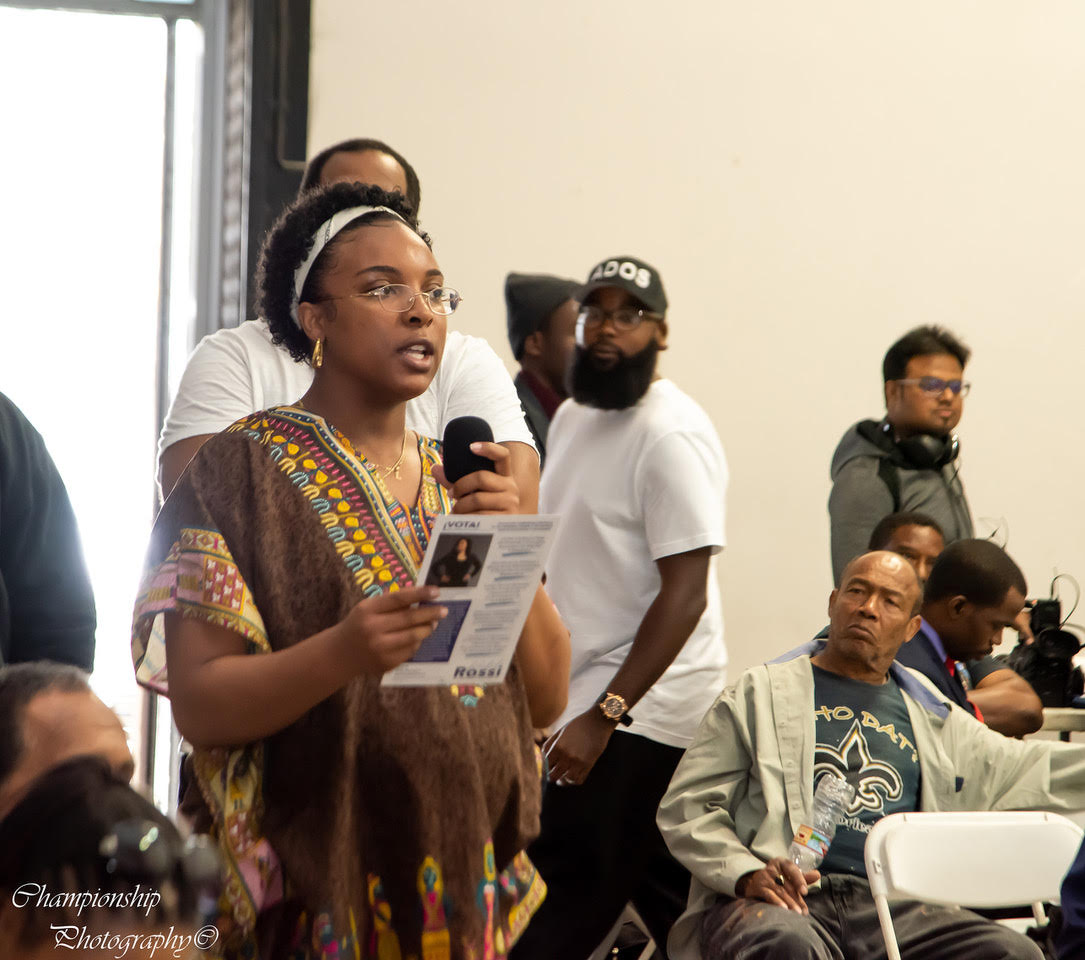 Photo by Marcus Champion:  A member of the community speaking at the Fight to Save Black LA Candidate Forum in Los Angeles February 2020.

Two bills calling for the study of reparations owed to African Americans are making their way through both the California legislature and the U.S. House of Representatives.

As state and federal lawmakers grapple with whether or not the State of California — and the United States as a whole — should take a closer look at what it owes the descendants of enslaved Africans in the United States, a group of Black California activists are getting ahead of the conversation. They are distilling the case for reparations down to why African Americans deserve to get paid for centuries of free labor and the Jim Crow laws and other forms of state-enforced discriminatory practices that followed. They are also specifying which segment of Black Americans should get those payments.

On July 12, the Los Angeles chapter of American Descendants of Slavery (ADOS) hosted a live stream that dug down into the complexities of securing reparations for the descendants of enslaved Black people in the United States.

They broadcasted the 90-minute special both on YouTube and Facebook. Experts on the history of the Black experience in America laid out the case for reparations. After that, ADOS activists followed with and a no-holds-barred conversation on race, racism and reparations. They discussed how some Americans, people of other races and some Blacks, too, often misunderstand the arguments at the foundation of their agenda.

The live stream featured Dr. William A. Darity and A. Kirsten Mullen, co-authors of “From Here to Equality: Reparations for Black Americans in the Twenty-First Century.” The husband-and-wife duo started the show with denouncing the notion that slavery in America is ancient history.

“When you’re thinking about slavery from a generational perspective, it’s not that long ago,” Mullen said. “The legacy of slavery is something that we’re still feeling today.”

Darity noted that reparations should not be distributed exclusively to mitigate the effects of generational slavery, but to recompense for all of the oppressive economic systems that have targeted Black people in America for centuries.

“The case that we build in ‘From Here to Equality’ is not restricted to so-called slavery reparations in the first place,” Darity said. “Our premise is that there is a series of atrocities that have been inflicted on Black Americans that have affected their economic status. So, we begin with slavery but then we move into the post-slavery era where the first atrocity was the failure to provide the formerly enslaved with any form of restitution.”

Darity mentioned the 1921 Tulsa Race Massacre, also known as the fall of Black Wall Street, citing it as one example of the ways Black people experienced economic violence in America.

He asserted that the racial wealth disparity in the US can be directly tied to atrocities like that committed by citizens as well as systemic discriminatory practices, and it can be assuaged with reparations.

“While 25% of white households have a net worth in excess of $1 million, it is only 4% for Black households in the United States. So, to close that gap would require an allocation of funds that would at least amount to 10 to 12 trillion dollars and that’s what we think should be one of the central objectives of a Black reparations project.”

As far as policy, Darity briefly talked about speaking to Congress about H.R. 40, also known as the Commission to Study and Develop Reparation Proposals for African-Americans Act, which is a bill that was introduced last year that if implemented would create a commission to determine the merits and logistics of providing reparations for the descendants of Black slaves.

Since its televised introduction in the House Judiciary Committee last year, legislators in the lower house of the U.S. Congress have not revisited H.R. 40. The bill would expire if no action is taken on it before the 116th Congress ends in January.

In California, on June 11, the State Assembly voted 61-12 to approve AB 3121, titled the Task Force to Study and Develop Reparation Proposals for African Americans. The Senate Judiciary Committee is now reviewing the legislation before it holds a hearing and votes on it. If passed, the bill would be referred to the full Senate for an up-or-down vote.

Last week, in Asheville, North Carolina, the city Council apologized for the town’s role in slavery and discrimination and i5 voted to provide reparations for its Black residents in the form of investments in areas where Black residents face inequities.

Antonio Moore, a Los Angeles-based attorney and ADOS co-founder, says the distinction between descendants of slaves and other Black Americans does make a difference when it comes to generational wealth, citing former President Barack Obama and U.S. Sen. Kamala Harris (D-CA) as his examples.

“What do you do in a world where your first Black president inherited $500,000 from his White lineage and your possible, most likely, first Black Vice President basically lived as an elite ‘Indian’ – they out earn White folks; and then told you that she’s just as Black as you because she went to Howard,” he said.

Moore was referring to $500,000 in stocks President Barack Obama and his wife Michelle Obama reportedly inherited from the former POTUS’ maternal grandparents’ estate. Regarding Harris, he was pointing to Insight Center study, The Color of Wealth, that revealed that “Asian Indian” families (Harris’ mother, who is deceased, was Indian) have the second highest median net worth ($460,000) of all sub-groups in Los Angeles County. They are outpaced in L.A. County by Japanese households ($592,000) and followed by Chinese ones ($408,000). U.S. Black median net worth in Los Angeles County ranks the lowest at $4,000.

According to a Gallup News poll conducted in 2019, 27 % of Black Americans are opposed to the United States making cash payments to individuals for reparations.

Hughes, who testified against HR 40 before the House Judiciary Committee in June 2019, says

Paying reparations to all descendants of Black people in the United States who were slaves “is a mistake.”

“Take me as an example. I was born three decades after the end of Jim Crow into a privileged household in the suburbs. I attend an Ivy League school,” he said at the congressional hearing. “Yet I’m descended from slaves who worked on Thomas Jefferson’s Monticello plantation.”

ADOS has faced pointed criticisms from several prominent media personalities and other Black activists. They say the organization engages in disinformation and divisive rhetoric, some saying the movement’s specific focus on descendants of slaves weakens Black communities, pitting Black immigrant groups against Black American descendants of enslaved people in the United States.

“The movement relies heavily on right-wing, anti-Black, anti-immigrant talking points, and a series of policy positions reliant on a person’s ability to produce documentation or what I am calling ‘slave papers’ in order to verify Black native identity,” said Jessica Ann Mitchell Aiwuyor, a writer for the Institute of the Black World 21st Century. “If implemented, the end result of these policies could be a weakened, further marginalized Black population.”

Yvette Carnell, co-founder, and host of the ADOS media outlet “Breaking Brown,” addressed some of these criticisms during the show.