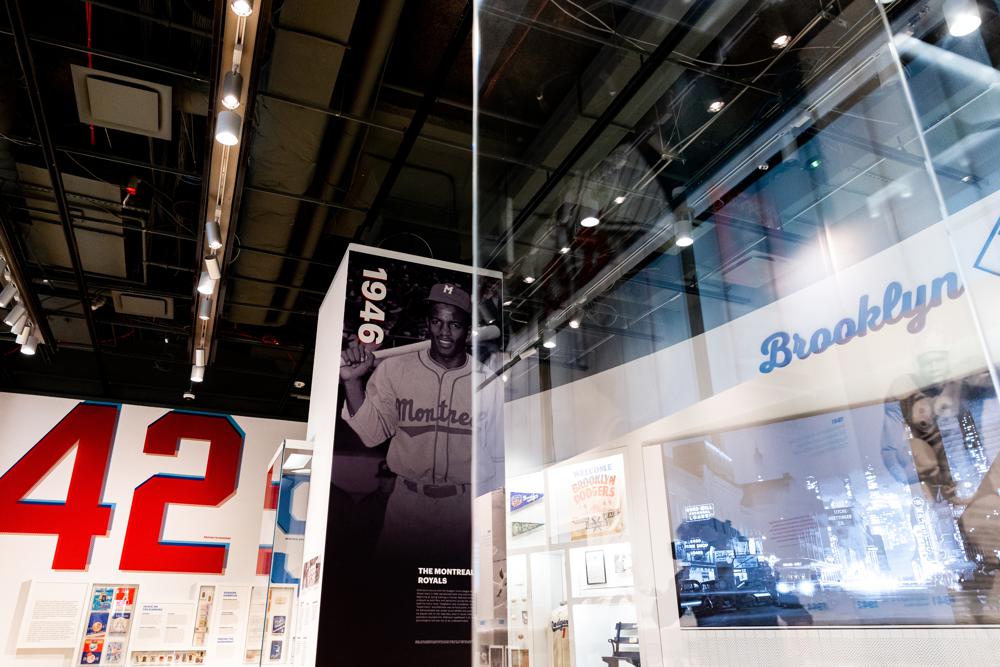 NEW YORK (AP) — Long dreamed about and in development for longer than the big league career of the man it honors, the Jackie Robinson Museum opened Tuesday in Manhattan with a gala ceremony attended by the 100-year-old wife of the barrier-breaking ballplayer and two of his children.

Rachel Robinson, who turned 100 on July 19, watched the half-hour outdoor celebration from a wheelchair in the 80-degree heat, then cut a ribbon to cap a project launched in 2008.

Her 72-year-old daughter, Sharon, also looked on from a wheelchair and 70-year-old son David spoke to the crowd of about 200 sitting on folding chairs arrayed in a closed-off section of Varick Street, a major New York thoroughfare where the 19,380-square-foot museum is located.

“The issues in baseball, the issues that Jackie Robinson challenged in 1947, they’re still with us,” David Robinson said. “The signs of white only have been taken down, but the complexity of equal opportunity still exists.”

Rachel Robinson announced the museum on April 15, 2008, the 61st anniversary of Jackie breaking the big league color barrier with the Brooklyn Dodgers at Ebbets Field. Robinson became NL Rookie of the Year, the 1949 NL batting champion and MVP, a seven-time All-Star and a World Series champion in 1955. He hit .313 with 141 homers and 200 stolen bases in 11 seasons and was elected to the Hall of Fame in 1962.

Robinson, who died in 1972, had an impact beyond baseball, galvanizing a significant slice of American public opinion and boosting the civil rights movement.

“There’s nowhere on the globe where dream is attached to our name — or our country’s name,” New York City Mayor Eric Adams said. “There’s not a German dream. There’s not a French dream. There’s not a Polish dream. Darn it, there’s an American dream. And this man and wife took that dream and forced America and baseball to say you’re not going to be a dream on a piece of paper, you’re going to be a dream in life. We are greater because of No. 42 and because he had amazing wife that understood that dream and vision.”

A gala dinner was held Monday night to preview the museum, which contains 350 artifacts, including playing equipment and items such as Robinson’s 1946 minor league contract for $600 a month and his 1947 rookie contract for a $5,000 salary. The museum also holds a collection of 40,000 images and 450 hours of footage.

“Without him, there would be no me,” Sabathia said. “I wouldn’t have been able to live out my dream of playing Major League Baseball.”

“It seems like we’re more divided than ever,” King said. “People like Jackie Robinson was a great reminder every single morning, every single evening that we have to do the right thing every day.”

Original projections had a 2010 opening and $25 million cost. The Great Recession caused a delay.

Ground finally was broken on April 27, 2017, when the Jackie Robinson Foundation said it had raised $23.5 million of a planned $42 million and the museum was intended to open in 2019. The pandemic caused more delays, and the total raised has risen to $38 million, of which $2.6 million was contributed by New York City.

Tickets will cost $18 for adults and $15 for students, seniors and children when the museum opens to the public on Sept. 5. The second floor includes an education center, part of a plan envisioned by Rachel Robinson.

“She wanted a fixed tribute to her husband, where people could come and learn about him, but also be inspired,” said foundation president Della Britton, who headed the project. “We want to be that place, as young people now say, a safe space, where people will talk about race and not worry about the initial backlash that happens when you say something on social media.”

David Robinson said his father would have been proud.

“He was a man who used the word ‘we,’” David said. “I think today Jackie Robinson would say I accept this honor, but I accept this honor on behalf of something far beyond my individual self, far beyond my family, far beyond even my race. Jackie Robinson would say don’t think of you standing on my shoulders, I think of myself as standing on the shoulders of my mother, who was a sharecropper in Georgia, my grandmother, who was born a slave.”