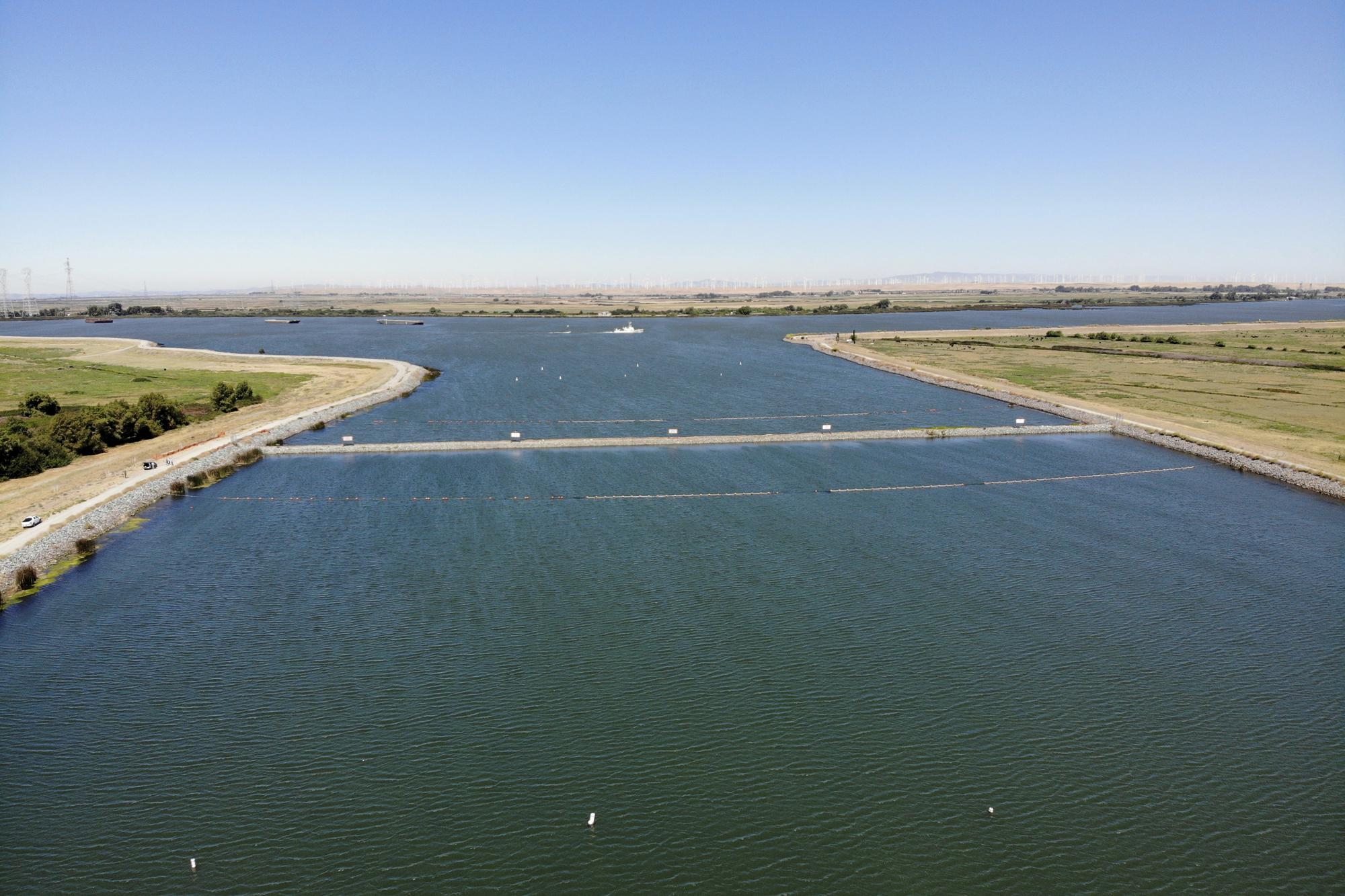 RIO VISTA, Calif. (AP) — Charlie Hamilton hasn’t irrigated his vineyards with water from the Sacramento River since early May, even though it flows just yards from his crop.

Nearby to the south, the industrial Bay Area city of Antioch has supplied its people with water from the San Joaquin River for just 32 days this year, compared to roughly 128 days by this time in a wet year.

They may be close by, but these two rivers, central arms of California’s water system, have become too salty to use in some places as the state’s punishing drought drags on.

In dry winters like the one California just had, less fresh water flows down from the mountains into the Sacramento River, the state’s largest. That allows saltier water from Pacific Ocean tides to push farther into the state’s main water hub, known as the Delta. It helps supply water to two-thirds of the state’s 39 million people and to farms that grow fruits and vegetables for the whole nation, playing a key but sometimes underappreciated role in the state’s economy.

A drought that scientists say is part of the U.S. West’s driest period in 1,200 years plus sea level rise are exposing the fragility of that system, forcing state water managers, cities, and farmers to look for new ways to stabilize their supply of fresh water. The Delta’s challenges offer a harbinger of the risks to come for critical water supplies elsewhere in the nation amid a changing climate.

Planners and farmers are coming at the problem of saltwater intrusion with a desalination plant, an artificial rock barrier and groundwater pumps. Those who can’t engineer their way out of the problem are left with a fervent hope that things will change.

“We just try to hang on and hope the water quality gets better,” said Bobby Costa, a farmer who has seen his cucumber yields go down by 25% this year compared to wetter years.

The Delta is the largest estuary on the west coast of the Americas. It’s home to endangered species such as chinook salmon and Delta smelt that require certain water flows, temperatures and salt mixes, as well as hundreds of square miles of farmland and millions of people who live, work and recreate in the region.

Other estuaries such as the Chesapeake Bay and within the Everglades don’t play as critical a role in directly supplying water for drinking and farming. But those estuaries are also at risk of creeping salt, causing problems for ecosystems, groundwater supplies and other needs.

Giant pumping systems built more than a half a century ago send Delta water south to major urban centers like Los Angeles and huge farming operations. The farther east the salt moves, the more at risk that water system becomes. Brackish water that creeps into the system isn’t as salty as ocean water, but it’s salty enough to render it undrinkable for some crops and for people.

“The fallout of losing control of the Delta is very serious,” said Jacob McQuirk, principal engineer for the state’s Department of Water Resources.

Last year, the state hauled 112,000 tons of rock and stacked it 30 feet (9 meters) deep in a key Delta river to stop salty water from getting too close to the pumps. It was the second time in the past decade the barrier was needed; the Department of Water Resources first installed it during the last drought in 2015.

It was supposed to be only temporary, but plans to remove the barrier last fall were scrapped due to dry conditions, though a notch was cut to allow fish to swim through. Officials still hope to take it out this November.

The state has asked the federal government for permission to build two more barriers further north if the drought worsens, arguing it will be necessary to protect water supplies. In the longer term, the state wants to construct a massive tunnel that would move water around the Delta entirely, which officials say would make it easier to capture more during times of heavy rain and guard against the risks of this salt water intrusion.

But advocates for the region worry it’s just another solution that will leave the farmers, fish and people who rely on Delta water high and dry.

While the barrier protects the pumps, it does little to help some interests within the Delta who rely on fresh water before it heads south.

Take Hamilton, who leases about 50 acres of vineyards to grow wine grapes along the Sacramento River. The land belongs to Al Medvitz, who farms alfalfa and other crops on more than five square miles of land. The water they draw from the river has always been tidally influenced, and they’ve learned how to pump from it when the tides are out and the salt content low.

But since early May, Hamilton hasn’t been able to pull out any water at all, even during low tides, because it’s too salty for his grapes. If he continued to use it, first the edges of the leaves on the vine would begin to burn and crinkle, then fewer grapes would be able to grow on each bunch, eventually rendering the crop unusable.

To avoid that, he taps groundwater from a well farther up the property and runs it through a ditch down to his drip irrigation lines, a process that takes longer. The owner’s alfalfa, which is used to feed cows, can withstand higher salt levels, so for now it can still drink up the river water.

The two men want approval from the state to build a small reservoir on the property to store fresh water for use in dry times. If they are forced to turn to salty water more and more, it will hurt the soil over time.

Hamilton’s goal, he said, is “to have a soil that my kids will be able to farm in.”

Others, like Costa, don’t have as many options. He farms about four square miles (10 square kilometers) of land in the southern reach of the Delta. He gets water from several rivers in the Delta, delivered by an irrigation district through a ditch on his property. This year, the water’s higher salt content is evident, leaving white stains on the dirt in his fields and hurting his cucumber crop.

He sells the cucumbers to a company that turns them into pickles for use at Subway and other stores. His yield is down about 25% this year, and more of the cucumbers he picks are crooked, making them harder to use for pickling.

“If you don’t repulse salinity in the Delta, then the ocean slowly creeps in and at some point you get water that’s unusable and people are ruined,” said John Herrick, general counsel for the South Delta Water Agency, which is responsible for protecting the region’s water supply.

Meanwhile in Antioch, a city of 115,000 people, officials are investing in desalination. Last year, things were so bad the city couldn’t pull water from the river at all.

The plant will be the state’s first inland desalination plant for brackish surface water, said John Samuelson, the city engineer and director of public works.

Desalination plants are often controversial; earlier this year the state rejected a proposal in Orange County that would draw water from the ocean. But water in the Delta isn’t as salty, so it takes less energy to make it fresh. Samuelson said other Bay Area cities are reaching out to Antioch to learn more about its effort as they consider their own options for stabilizing the water supply as climate risks grow.

“We just know that this problem is going to continue to get worse in the future,” Samuelson said. “We want to make sure that we are being forward thinking and solving the problem today.”