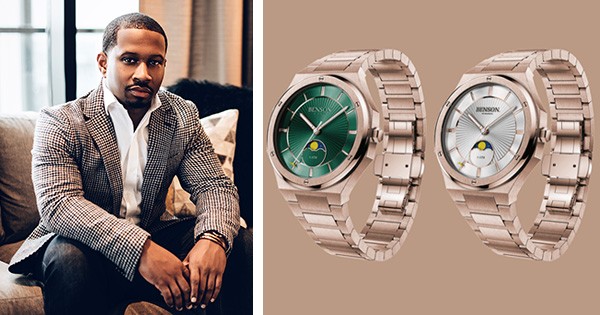 Marcel Benson, founder of The Benson Watch Company and an alum of Workshop At Macy’s, expands his brand.

Nationwide — The Benson Watch Company has announced its first public raise of $1,070,000 on Republic’s private investment platform, which allows community investors to get involved at the ground level. Just a few short years ago, founder and CEO Marcel Benson was sitting in a consulting job that he did not love; he was beginning to lose sight of his purpose in life. He thought that he had done things right by going to school and landing a good job. However, as he grew in his career he was not fulfilled at all. He decided one day to abruptly leave his job and pursue his passion full time.

Marcel left because he felt like he didn’t own his time and that the countless hours he was spending at work didn’t yield any emotional returns. The consultant decided that he would not only leave his job to grow his watch company but use his story to inspire the masses to do the same.

Since making the leap, he has inspired thousands around the country to do the same. Benson was recently named amongst the top Black-owned watch brands in the United States by the New York Times and ranked near the top of “25 Watch Brands to Know” in Town & Country Magazine. Mr. Benson was selected as a keynote speaker at the famous Inhorgenta Trend factory in Munich, Germany where he discussed crafting an authentic story and inclusion in the watch industry. He endeavors for Benson to be a household name globally. He’s already off to a great start having secured partnerships with MGM Grand, Macy’s, and GILT Groupe. Join Benson as they make history in becoming the first globally recognized Black-owned watch brand.

Benson is looking to make history as the first globally recognized Black-owned watch brand and wants to get the community involved in its success. He outlines how growing up collecting watches he never saw himself represented and he wanted to change that for the millions of black collectors around the world.

INVEST IN BENSON TODAY FOR AS LITTLE AS $250:

Benson Watch Company was started by Marcel Benson out of his passion for timepieces. He decided to showcase his decision to leave his corporate job and pursue his dream and encouraged others to do the same in the process. His honest and transparent approach has garnered him quite a bit of attention. He also gained thousands of raving fans because his story resonates. Benson’s slogan is “Time Should Be Spent Doing What You Love” the company’s mission is to encourage the masses to apply the idea to their lives through timepieces.

Republic is the private investment platform for investors seeking high growth potential. It is an investment crowdfunding site using Reg CF to offer investments in startups, video games, and real estate to anyone, in some cases for as little as $10. The platform offers a wide selection, including multiple companies with black founders.For more information about the Benson Watch Company, visit BensonWatch.com or follow the brand on Facebook or Instagram