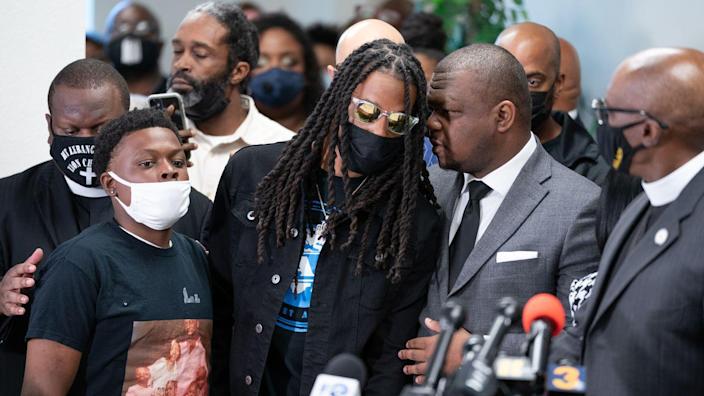 Elizabeth, N.C. is the latest American town to erupt in protests over the killing of a Black man in an encounter with police. Last week, local resident Andrew Brown was killed by sheriff’s deputies after they arrived at his home to perform an arrest for a drug warrant. According to news reports, Brown was killed as he attempted to drive away. He was unarmed and not known to use weapons.

An independent autopsy showed that there were gunshot wounds to the back of Brown’s head.

However, Brown’s family, who recently won the right to view the shooting video, were horrified by what they saw. They described it as an “execution.” According to people who viewed the 20-second video clip, Brown was shot by the police when he had both hands on the steering wheel.

“At the news conference on Monday, Ms. (Chantel) Cherry-Lassiter said the footage she and the family saw showed Mr. Brown behind the wheel of his car in his driveway, a sheriff’s vehicle blocking his exit and deputies surrounding him,” said The New York Times. “‘They run up to his vehicle shooting’ she said. Mr. Brown backed up, away from the officers. ‘It was at no time in the 20 seconds that we saw that he was threatening the officers in any kind of way,’ she said.”

After the shooting, familiar events occurred; mass protests, lawsuits and calls for the local law enforcement chief to resign. Benjamin Crump, an attorney who specializes in representing the families of Black people killed by the police, appeared in a video alongside Cherry-Lassiter, who is the Brown family attorney.

“This tragic incident was quick and over in less than 30 seconds, and body cameras are shaky and sometimes hard to decipher. They only tell part of the story,” said Wooten in a video.

However, some Pasquotank County sheriff’s deputies have taken actions that indicate they expect fallout from the video. Two have resigned and seven were placed on administrative leave, according to Democracy Now!

“And, you know, a warrant is not a license to kill. A warrant doesn’t mean you get executed on the spot. A warrant doesn’t mean you’re guilty. And there’s no — the Supreme Court has said if you flee, it is not illegal, that people don’t have a right to shoot you in the back. And we know from the audio reports he was shot in the back,” said Barber, in a Democracy Now! interview.

While most of the country reacted with relief and elation when Minnesota police officer Derek Chauvin was convicted for causing the death of George Floyd, police killings haven’t stopped.

Brown is just the latest in a string of killings. However, even a video showing Chauvin choking Floyd to death has become politicized in today’s hyper-partisan environment. A CBS poll showed 90 percent of Democrats and 75 percent of independents believed the Chauvin verdict was correct. But the poll showed that only 54 percent of Republicans supported the jury’s decision.

Police treatment of African Americans has attracted international attention. According to The Guardian, a left-wing British newspaper, a report from 11 human rights experts says police violence against Black Americans is a “crime against humanity.”

“They point to what they call ‘police murders’ as well as ‘severe deprivation of physical liberty, torture, persecution and other inhuman acts’ as systematic attacks on the Black community that meet the definition of such crimes,” said The Guardian. “They also call on the prosecutor of the international criminal court (ICC) in The Hague to open an immediate investigation with a view to prosecutions.”