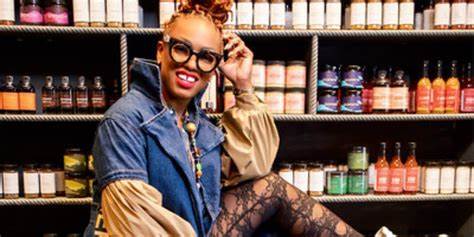 The Spice Suite’s Angel Gregorio is giving Black-owned businesses in the D.C-area a place to call their own.

Angel Gregorio’s specialty seasoning business, The Spice Suite, has always been about helping other Black-owned businesses. She’s hosted over 450 pop-ups for Black businesses in her Washington D.C. store.

Gregorio knows first-hand how expensive it is to own commercial property in the Chocolate City. Now she’s doing her part to provide other local Black-owned businesses with an opportunity to have a brick-and-mortar space of their own.

With a $1 million investment, Gregorio turned a 7,500 square foot lot in the Langdon section of Washington D.C. into a strip mall for local Black-owned businesses. And she’s calling the space Black And Forth.

“It was just this catchy, cool name that I created for how I describe my process of going back-and-forth with Black business owners,” Gregorio said in an interview with DCist/WAMU. “And now it is the name of a shopping center — a strip mall — that I own in D.C. So I feel good about that, and I’m grateful to be in the space.”

Gregorio accessed the capital she used to buy the space through D.C.’s Commercial Property Acquisition Fund, which offers grants to eligible businesses to help them acquire commercial property. The fund is part of D.C. mayor Muriel Bowser’s goal of increasing the city’s share of minority-owned businesses to 33 percent by 2028. According to DCist/WAMU, the Bowser Administration has already awarded $4 million to 12 businesses. And they plan to continue to share the wealth.

“We’re going to keep making these sorts of investments, so we can do the sorts of transformational things that allow our Black and brown entrepreneurs not only to be great business people, [but] to build wealth that they can pass on for generations to come,” said At-Large Council Member Kenyan McDuffie at Black And Forth’s January 13 ribbon cutting ceremony.

Along with relocating The Spice Suite, Black and Forth will host four other hair and nail salons, who will lease space inside renovated shipping containers. Gregorio also hopes to add a Black farmers market in the spring.

In a December Instagram post, Gregorio was optimistic about what Black and Forth will mean to Black businesses and the community.

She wrote, “In an effort to create a model for affordable commercial space (akin to affordable housing, except privately owned by me), this space will be a lot of things. A lot of community.”