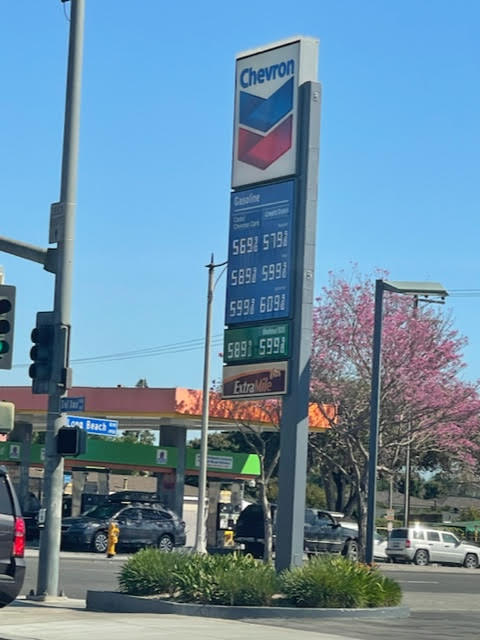 As the cost of gas continues to soar in California, Black leaders, state lawmakers and frustrated citizens are urging Gov. Newsom to take immediate action to decrease high prices at the pump.

Last week, Shane Harris, president of San Diego-based People’s Association of Justice Advocates (PAJA), wrote a letter to Newsom. Harris urged the governor to declare a “state of emergency,” allowing him to cut the gas tax, which Harris believes helps to drive up the cost of gas.

“We are seeing gas at nearly $5.50 a gallon, which is nearly three dollars more than the national average,” Harris said. “I am writing you as someone who works on a daily basis with communities who are already struggling to pay their rent and essentially living check to check.”

PAJA is a national civil rights organization and policy institute founded to direct action with a balanced standard of justice for all no matter their race, religion, criminal record, sexuality, gender status, or citizenship.

Across social media, African Americans are blasting the sharp increases in gas prices. Ellen Nash, a San Diego resident and chair of the Black American Political Association of California (BAPAC) posted a photo on Facebook of a gas station in Beverly Hills, where reports say fuel is above $6 per gallon.

“We are experiencing a gas prices epidemic,” said Nash. “Time to shelter in place again. And work remotely!! With A few exceptions. This is ridiculous.”

Western allies, including the United States, announced sanctions, including restrictions on Russia’s central bank and global payments system. Since the attacks that have caused over a million people to flee Ukraine, a former Soviet republic located on the southeastern doorsteps of Russia, gas prices in California and the rest of the country have soared.

Economic experts say that the U.S. only gets 5% to 10% of its crude oil and refined products from Russia, but gas prices have passed the $5 mark up and down the state. In certain places, such as Beverly Hills in Los Angeles, gas is hovering around $6 per gallon.

“Well, now we have a war going on in Ukraine and while I know that we get our gas here in California from a variety of countries it is still clear that the war in Ukraine is adding on to an already growing crisis at our pumps here in California,” Harris wrote. “While I understand the foundation of the gas tax provides more funding to our state toward things like infrastructure, I also see real people hurting and that is concerning.”

The gas tax in California is at 51.1 cents per gallon, and it is scheduled for another increase in July. California Assembly Republicans last week said they are backing a bill, AB 1638, that Assemblymember Kevin Kiley (R-Rocklin) introduced. It would eliminate the current gas tax for six weeks.

At the release of Harris’s letter, San Diego County recorded its steepest hike in the average-price of gasoline since Sept. 28, 2019. Self-serve regular fuel rose 8 cents to $4.975, in 16 days, according to the American Automobile Association (AAA) and Oil Price Information Service (OPIS).

Hardworking families are having to cut back from other expenses just to fill up their gas tanks,” said Sen. Patricia Bates (R-Laguna Niguel) on March 2. “Higher gas prices are eating up their budgets for food and groceries, prescription medications, school supplies, and other necessary expenses. With such an enormous surplus, this is just unacceptable.”

A study conducted by UCLA’s Luskin Institute on Inequality and Democracy revealed hardships Blacks and Latinos are experiencing due to the COVID-19 pandemic.

The study estimates that more than 1.9 million adults in California were unable to pay their rent on time in July 2020.

“Californians pay the highest gas tax in the nation, which is adding to the skyrocketing cost of fuel,” said Assemblymember Janet Nguyen (R-Huntington Beach). “Our communities are struggling to make ends meet while Sacramento leadership works to increase the cost of living even higher.”