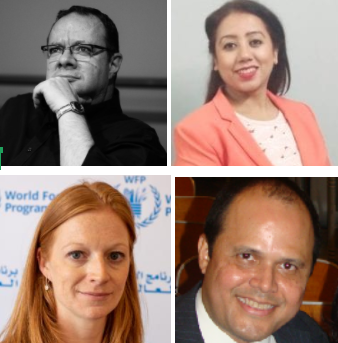 The pandemic has exacerbated food insecurity around the world. The World Food Program is short of resources to alleviate hunger.

Conflicts, climate change and now COVID-19 are the three C’s driving 270 million people to famine in the most impoverished countries in Asia, the Middle East, Africa, Central and Latin America. Officials at the World Food Program (WFP), the hunger relief arm of the United Nations that feeds about a hundred million people each year in some 88 countries, warned that they are running out of resources to meet the demand for staple foods and thus prevent people dying from starvation.

“We are asking globally $13.5 billion for our budget this year, but we forecast being able to raise only about $7.8 billion,” said Steve Taravella, WFP’s senior spokesperson at a briefing organized by Ethnic Media Services on Feb. 26.

Before the pandemic, there were about 135 million people acutely hungry in the world, but the collateral economic impacts of the virus have doubled that number. WFP estimates that in 2021, about 19,000 officials working in developing countries will have to duplicate efforts to serve at least 120 million people, in hardest-hit places like Yemen, South Sudan, Nigeria and Burkina Faso.

“For some years WFP and others working on global hunger were really effective in bringing hunger down to what we hoped would be the zero hunger goal of the UN by 2030. It’s pretty clear now, that’s not going to happen,” Taravella said. “COVID is making the poorest of the world poorer and the hungriest of the world hungrier.”

WFP won the Nobel Peace Prize last year for its efforts to eradicate hunger in areas where natural disasters and conflict have disrupted normal food distribution channels. Areas where bombed roads prevent trucks carrying flour, rice, lentils, peas, cooking oil and salt from getting through. Areas where airstrikes destroy planes carrying dietary supplies. Areas where incessant fighting prevents hungry people from venturing out for food or aid workers from moving safely to provide it, at a time when crops cannot be harvested.

“There have been terrorist acts against villagers and aid workers by Al-Qaeda Al-Shabaab, Boko Haram and ISIS,” Taravella said. Recently, a WFP staff member was killed in the Democratic Republic of the Congo while accompanying the Italian ambassador on a visit to a school feeding site.

WFP provides school meals in the classrooms, helps pregnant women and new mothers to understand nutrition, and supports small farmers to find markets for their produce.

“We work very closely with governments but we see ourselves there only as a temporary band-aid. Our goal is to help build the country’s capacity to manage the programs,” said Taravella.

Although the WFP does not operate food banks in the United States, immigrants in the country have contributed greatly to alleviating hunger in their homelands after natural disasters such as the typhoon that devastated the Philippines or the hurricanes in Central America. But COVID has also impacted remittances.

“When COVID hit, we were really hoping that the hurricane season will be a quiet one as we had a few years ago, but that was not the case,” said Elio Rujano, communications officer for the WFP’’s regional bureau for Central America and the Caribbean.

The 2020 season produced 30 named storms, of which 13 became hurricanes, six of them devastating in scope. Eta and Iota ravaged areas in Guatemala, Honduras and Nicaragua while tropical storm Amanda hit El Salvador. Since 2014, these countries have already been experiencing prolonged periods of droughts or excessive rains caused by the El Niño phenomenon, both causing the destruction of crops and the livelihood of farmer families.

“In the past we were only focusing on the dry corridor where rural farmers live, but now, because of the pandemic, hunger has expanded to urban areas,” Rujano said from his Panama City office. “50% of the labor in Latin America and Central America is informal labor. People work on the streets, and since they could no longer go out, they couldn’t meet their basic needs.”

Back in 2018, hunger in the region was affecting 2.2 million people and that number is approaching nearly 8 million in 2021.

Here WFP works to support communities to become more resilient to climate change. They teach them to replace the plantation of fragile products such as beans and maize with beekeeping, since honey can be stored for longer periods. They also provide people with cash transfers to buy food at local shops and teach them about nutrition.

Rujano estimates that they could serve up to 2.6 million people this year if they reach $47 millions in donations to reach that population.

Although the situation in Central America is worrying, in places like Yemen where conflict is the main driver of the hunger crisis, the figures are even more chilling. Since the end of 2018, this country has been described as the home of the world’s largest humanitarian crisis. Six years of war between the Houthi rebels who control the north of the country and the nationally recognized government dominating the south, have devastated infrastructure, destroyed agricultural land, eroded government services and left the healthcare system on its knees.

About 4 million people out of a population of 30 have become internal refugees while food prices are on average 140 times higher than before the war.

“The hunger situation right now in Yemen has hit a new peak,” said Annabel Symington, head of communications for the WFP in Yemen. “The forecast for 2021 is that 50,000 people are already living in famine like conditions, another 5 million are at severe risk of falling into famine and about 11 million people are facing crisis levels of food insecurity,” she added.

Famine occurs when malnutrition is so widespread that people are literally starving from lack of access to nutritious regular food.

WFP assists more than 12 million people in Yemen – its world’s largest operation – delivering flour, pulses, oil, sugar and salt, as well as canned goods for those who do not have immediate access to kitchen equipment such as the case of the internal displaced people.

The conflict has contributed to nearly half of all children under the age of 5 in Yemen facing acute malnutrition, which not only affects their physical and cognitive development, but puts them at risk of death. 11.2 million pregnant or breastfeeding mothers are also malnourished and according to Symington these numbers can be an underestimate.

Mothers are resorting to desperate measures to survive: either they eat less to feed their children or they must choose which of their kids eat.

After COVID, death rates skyrocketed, but as the testing capacity is limited, it is unknown for sure how many people contracted the virus. “The lockdown was lifted quite early because people will starve if they stay at home,” Symington said.

“It is clear that peace is what Yemen needs so we can address the food crisis,” she added.

In India, the country with the highest number of food insecure people due to its large population (1.3 billion inhabitants), the pandemic worsened the living conditions for domestic migrants.

Almost 139 million people move from rural areas to large cities to work in informal jobs in factories or as street vendors. The coronavirus forced them to go back to their villages, and since transportation was not working, they had to move by foot, facing not only long hours of walking but hunger. The pandemic also disrupted the harvesting season in March and April affecting food supply chains.

“Although the restrictions (due to the pandemic) have been eased out and these people came back to the cities, there are very few jobs due to the economic slowdown,” said from New Delhi Parul Sachdeva, country advisor in India for Give2Asia, an NGO that supports grassroots organizations in 23 countries in Asia Pacific.

“Today 8 in 10 people are eating less food than before the pandemic and nearly 1 in 3 people face moderate or severe food insecurity.”

The government approved a package of US $22.6 billion for the distribution of staple foods during four months and cash transfers of $ 500 rupees (US $ 7) for up to three months. But informal workers were left out of the package, forcing civil society organizations to support those returning to their villages with meals, health supplies and shelter.

Organizations like Akshaya Patra distributed 1.8 million meals a day to children across India. GIve2Asia is now working on economic rehabilitation through training and input costs for agriculture.

“These are the kind of activities we wish to promote,” Sachdeva added. “I think they provide some kind of solution for livelihood regeneration in a country like ours,” she concluded.