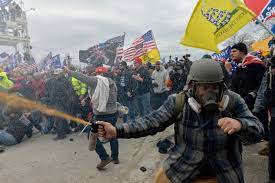 As time has gone on and more information has been revealed, the Capitol riot is looking less like a spontaneous event and more like multiple plots and motivations all converging into one treason-flavored clusterfuck. Court documents submitted by federal prosecutors allege that members of the Proud Boys and the Oath Keepers coordinated on how they work together ahead of the riot on Jan. 6.

According to CNN, a court filing from prosecutors in the Justice Department claims that Kelly Meggs, one of the leaders of the Oath Keepers, sent Facebook messages to other Oath Keepers detailing how he had orchestrated a plan to coordinate with the Proud Boys during the rally. On Dec. 22, Meggs sent messages outlining how the Oath Keepers had 50 to 100 people already based in D.C., as well as stating he had “made contact with PB and they always have a big group. Force multiplier.”

Ever a family man, on Christmas Day, Meggs allegedly sent more Facebook messages detailing what prosecutors called a “provisions list” of body armor and non-gun weapons to bring to the rally as well as providing more details of the plan he made with the Proud Boys.

“You can hang with us we will probably be guarding [redacted] or someone during the day but then at night we have orchestrated a plan with the proud boys,” Meggs wrote, according to Facebook messages excerpted in the court record.

“I’ve been communicating with [redacted] the leader. We are going to march with them for a while then fall back to the back of the crowd and turn off. Then we will have the proud boys get in front of them … we will come in behind antifa and beat the hell out of them.”

The allegations against Meggs marks one of the first instances where prosecutors have publicly alleged that two far-right extremist groups were working in tandem to enact violence. At the end of the day aren’t they all the same thing, though? A violent white supremacist is a violent white supremacist, no matter what title they give themselves to feel like a big boy.

In the wake of the riot, the Justice Department has heavily pursued criminal conspiracy charges against the Proud Boys, Oath Keepers, and other militia groups that participated in the riot. While the evidence alleges that the two groups plotted together before the riot, so far it has not suggested that there was an overarching conspiracy to attack the Capitol that day.

Meggs is currently in jail and has argued he should be released while he awaits trial. The allegations against Meggs were released as part of the prosecutor’s argument that Meggs should be denied release.