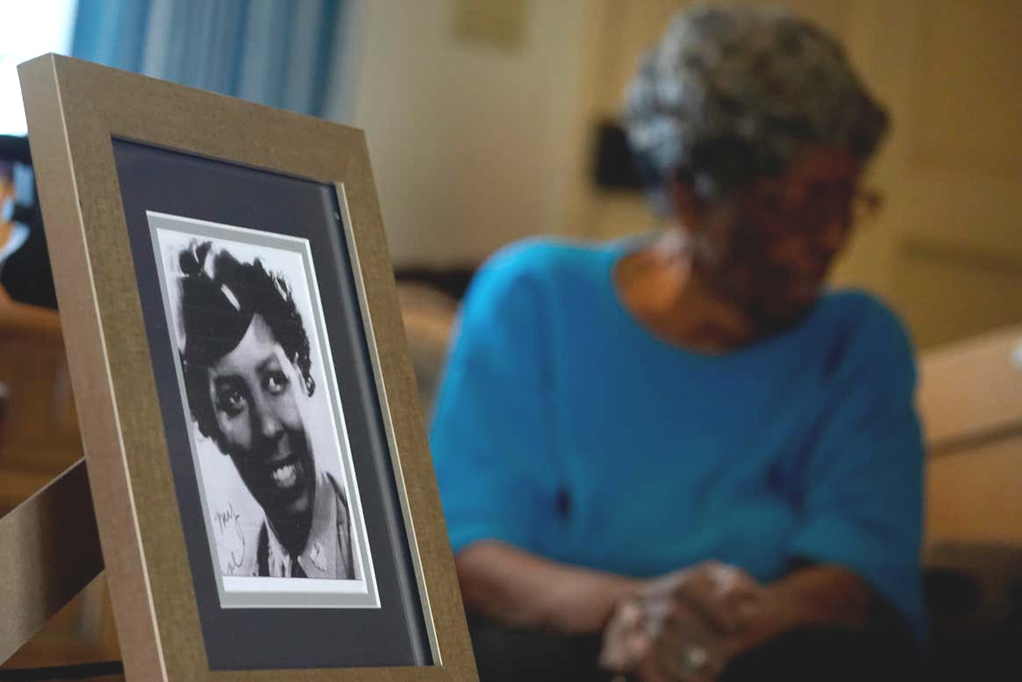 Of the 855 who served, only seven are still alive to receive the Congressional Gold Medal.

World War II veteran Maj. Fannie Griffin McClendon shows an image of herself during her time in the military. Photo: Matt York (AP)

I’m honestly surprised that Hidden Figures didn’t spur some kind of anthology series about all the untold stories of Black greatness throughout American history. Simply put, there are so many instances of Black men and women achieving incredible things that have not gotten the recognition they deserve. Take for instance the battalion of all Black women who served during World War II. After decades of going unrecognized by history, Congress is set to finally honor them with the Congressional Gold Medal.

According to the Associated Press, a bill to award the 6888th Central Postal Directory Battalion with the honor passed in the Senate and is currently awaiting approval in the House. Of the 855 members who served, only seven are alive to receive the honor. “I just wish there were more people to, if it comes through, there were more people to celebrate it,” Maj. Fannie Griffin McClendon, who served in the battalion, told AP.

The battalion—known as the Six Triple Eight—was tasked with processing millions of pieces of undelivered mail. They had to dodge German U-boats and scramble to avoid a rocket upon their arrival to England, all just to get to the rat-infested, poorly heated aircraft hangers where they were stationed. The backlog of mail had grown to an absurd level, with many soldiers complaining about lost letters and care packages. This resulted in the Six Triple Eight taking on the motto “No Mail, Low Morale.”

“There was an awful lot of mail. … They expected we were gonna be there about two or three months trying to get it straightened out. Well, I think in about a month, in a month and a half, we had it all straightened out and going in the right direction,” McClendon told AP.

The 6888th toiled around the clock, processing about 65,000 pieces of mail in each of the three shifts. They created a system using locator cards with a service member’s name and unit number to ensure mail was delivered. Sometimes, they had to resort to detective work when a parcel only had a common name or a service member’s nickname.

Despite their achievements, the unit endured questions and criticism from those who didn’t support Black women in the military.

Housing, mess halls and recreation facilities were segregated by race and sex, forcing them to set up all their own operations. The unit commander, Maj. Charity Adams, was also criticized by a general who threatened to give her command to a white officer. She reportedly responded: “Over my dead body, sir.”

They cleared out a backlog of about 17 million pieces of mail in three months — twice as fast as projected. The battalion would go on to serve in France before returning home. And like so many Black units during World War II, their exploits never got the attention afforded their white counterparts.

“I think that the 6888th, the command inherently knew that their presence overseas meant more than clearing that mail backlog,” Retired Army Col. Edna Cummings, who was not a member of the 6888th, told AP. “They were representing opportunity for their sisters at arms back in the United States who were having a hard time dealing with the racism and sexism within the ranks.” Cummings has been among those fighting for Congress to give these women the recognition they deserve.

Even after returning from the war the women of the Six Triple Eight continued to make history. Elizabeth Barker Johnson used her G.I. Bill to become the first woman to attend Winston-Salem State University in North Carolina, and McClendon would go on to join the Air Force after it integrated, becoming the first woman to command an all-male squadron during her time with the Strategic Air Command

“These women were trailblazers, and it is past time that we officially recognize them for their incredible contribution to our troops during World War II,” U.S. Sen. Maggie Hassan, a New Hampshire Democrat who co-sponsored the Senate bill, told AP.

I truly hope the bill passes quickly in the House, and that the women of the Six Triple Eight finally receive the recognition they deserve. Lord knows it has been long overdue.