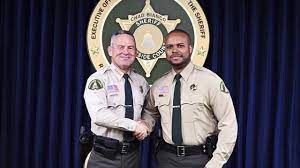 LAKE ELSINORE, Calif. (AP) — A Southern California sheriff’s deputy was shot and killed Friday, just two weeks after another deputy in the department was slain in the line of duty.

The deaths of deputies Darnell Calhoun on Friday and Isaiah Cordero on Dec. 29 were the first since 2003 where a Riverside County sheriff’s deputy was killed in the line of duty, Sheriff Chad Bianco said.

The suspect in Calhoun’s death is in custody and was listed in critical condition after a gunbattle with a second deputy, Bianco said Friday during a news conference.

Calhoun was fatally shot in the city of Lake Elsinore, the sheriff said. He died after being taken to the hospital in serious condition.

“I shouldn’t be here tonight having to do this again,” Bianco said Friday outside the hospital. “I’m devastated to tell of the loss of another of our deputy sheriffs who was killed in the line of duty today.”

Calhoun is survived by his pregnant wife, Bianco said. He had previously worked for the San Diego Police Department — the agency said on Twitter it was “devastated” to learn of his death — before transferring to Riverside last year.

“He was the most cheerful, the most positive, the most good, wholesome man you could imagine,” Bianco said.

Calhoun, 30, was the first deputy to arrive at the scene of an disturbance around 4:30 p.m. Friday following a call of “unknown trouble” where voices could be heard in the background, indicating a struggle, Bianco said.

“At this point, we are not completely sure of the circumstances surrounding the initial contact,” Bianco said.

The second deputy found Calhoun wounded in the street and confronted the suspect in a shootout. The suspect’s identity has not been released.

Friday’s shooting comes as the sheriff’s department is reeling from Cordero’s death. The 32-year-old was fatally shot last month during a traffic stop in the city of Jurupa Valley, east of Los Angeles.

Cordero had pulled over a pickup truck and the driver, 44-year-old William Shae McKay, shot the deputy as he approached the vehicle. Law enforcement pursued McKay in a manhunt that included a chase along freeways in two counties, authorities said.

McKay was killed during a shootout with deputies after the truck crashed.

Riverside County Sheriff Chad Bianco and Cordero’s family have called for the resignation of a Southern California judge who allowed McKay’s release from custody on bail despite his lengthy criminal history.

The sheriff said McKay was convicted of a “third strike” offense in 2021 that should have put him in state prison for 25 years to life, but the judge lowered his bail, allowing his release, and later released him following an arrest for failing to appear at his sentencing.