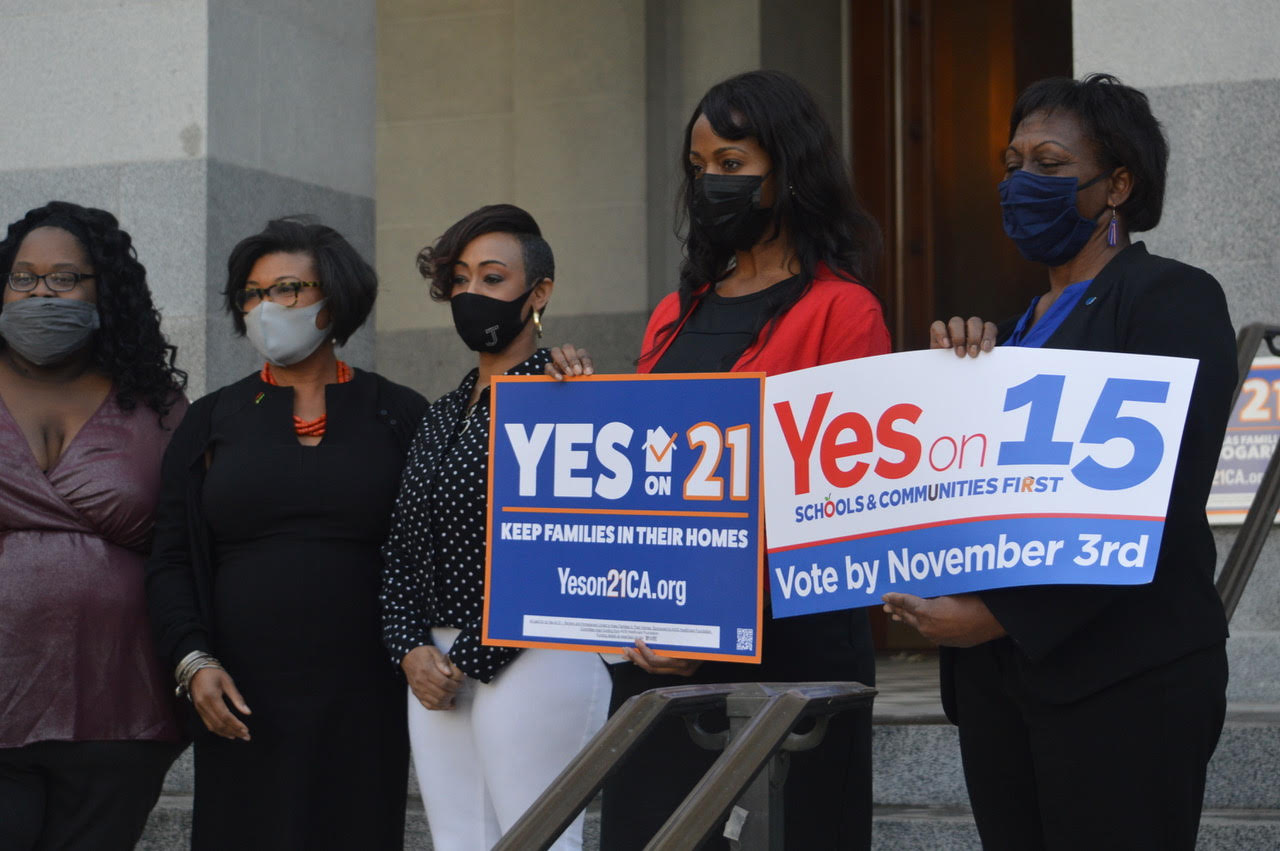 Sacramento, CA — The California Democratic Party African American Caucus (CDPAAC) hosted press conferences at four locations across the state to call on Black Californians to support what that group has deemed as the “pro-Black” propositions on this November’s ballot.

The news conferences were held in metropolitan areas with some of the largest numbers of African American voters in the state — Los Angeles, Oakland, San Diego and Sacramento — on Thursday, Oct. 22. The initiatives the CDPAAC has endorsed are: Prop 15 (split roll tax), Prop 16 (repeal of Prop 209); Prop. 17 (restoring voting rights for ex-prisoners); and Prop 21 (rent control).

“We will be expressing our support for pro-Black ballot initiatives. We will also be speaking specifically to the benefits the initiatives will have on the Black community,” said Kimberly Ellis who ran for chair of the California Democratic Party in 2019 and is a former recording secretary of the CDPAAC. She was in Oakland speaking with California Black Media by phone.

The CDPAAC’s Black women leaders who led the effort also used the political event to criticize what they describe as attempts by some “bad actors” within the African American community to undermine initiatives that could improve the lives of African Americans.

Kendra Lewis, vice chair of the CDPAAC, called out the California – Hawaii National Association for the Advancement of Colored People (NAACP), saying that group is one of the detractors whose positions on ballot measures go against African American interests.

“Sadly, we’ve seen the NAACP California-Hawaii chapter lose its moral compass as evidence of its most recent endorsements, including to pro-Black initiatives like Prop. 15 and Prop. 21,” Lewis said on steps at the north entrance of the State Capitol.

Lewis accused the California branch of the country’s oldest civil rights organization of accepting payments to take stances on legislation, but she also acknowledged the problem of money influencing politics is much larger than the NAACP.

“To be clear, this isn’t about any one person or institution as these types of payouts have been happening for far too long,” she added.

Although the CDPAAC is supporting four “pro-Black” ballot propositions, it is emphasizing two of them: Prop 15 and Prop 21.

Prop. 15, the “Tax on Commercial and Industrial Properties for Education and Local Government Funding Initiative,” would levy higher real-estate taxes on business and industrial buildings than on residential homes. The initiative’s intent is to increase funding for public schools, community colleges, and local government services by changing the tax assessment of commercial and industrial properties. The state’s fiscal analyst has estimated that, upon full implementation, Prop 15 would generate between $8 billion and $12.5 billion in revenue per year. Forty percent of the revenue would be allocated to schools while the other 60 % would fund local government.

Khiry Moore, an educator, photographer and entrepreneur in Sacramento who owns a couple of rental properties with his wife, says he neither supports Prop 21 nor Prop 15.

“The problem we have as a culture or race is that we don’t allow objective thought. We don’t focus on how these propositions would benefit or affect us as Black people,” he said. “You must remember. We – the Black Caucus — supported welfare reform and 1990s crime bills.”

“We get to a point where somebody tells us this issue is important to us and we go hard to defend it without thinking it through. We also don’t hold politicians responsible after elections,” Moore continued.  “They might promise us that this money will be spent on things that are important to us like schools, but how many times in the past have we seen this money raised and re-routed to other spending that has nothing to do with us and we are never there to follow up and hold these politicians feet to the fire? I’m still waiting on the lottery money from the eighties.”

“For small businesses, I think the (minimum) number is at $3 million. At the most 80 % (of Black businesses won’t meet that threshold),” Barnes said, describing the size of businesses that would be taxed if voters approve Prop 15 next week.

“If they do, we still believe that’s a benchmark. If we reach that level of success, paying your fair share is not going to break the bank,” she continued.

But Huffman and the California State Hawaii NAACP insist Prop. 15 would not benefit Black businesses and lower income Americans. In fact, in a statement about the initiative, Huffman said it would hinder the upward mobility of Black working people.

“The property tax hike on the November ballot will hurt minority communities — causing more gentrification, killing jobs, and increasing the cost of living for working families,” she wrote.

Moore agrees with Huffman. As a business owner who rents a commercial space for his photography studio, Moore also said taxing commercial property owners at a higher rate will cause landowners to find a way to make up for their losses.

“My landlord allows me to pay below market rate because he supports Black businesses,” he said. When taxes become too expensive for commercial property owners, Moore says, “they will just evict us and collect tax write-offs for vacant buildings.”

Almost $125 million has been poured into the fights for and against Prop 15. The Schools and Communities First Political Action Committee (PAC) has raised $63.39 million in favor of the initiative. Seven PACs, including Californians to Stop Higher Property Taxes, have collected $60.72 million in an effort to defeat Prop 15.

Prop 21, the “Local Rent Control Initiative,” would allow cities to introduce new rent control laws or expand existing ones. Huffman says she and California -Hawaii NAACP are concerned that, if Prop 21 passes, it would pave the way for higher real estate costs, which would increase unaffordability in the state’s housing market, leading to more evictions. This would severely affect the Black community, she says.

Of more than 2.3 million African Americans living in California, 5.5% of the total population, about 64% are renters, according to TenantsTogether.org. More than 16 million people in California are renters.

But many Black landlords like Moore look at Prop 21 from a different angle.

He says more rent control will make landlords super-selective about who they rent their apartments to, forcing them to reject applicants who are low income or have lower-than-average credit scores.

The effort to place Prop 21 on the ballot is to repeal the Costa-Hawkins Rental Housing Act (Costa-Hawkins). Costa-Hawkins is a state statute that limits the use of rent control in California.

Prop 21 is opposed by a diverse group of seniors, veterans, labor, homeowners, affordable housing advocates, and businesses. They say the timing of the initiative is especially bad, too, as many homeowners in the state that rent properties are suffering because of the COVID-19 pandemic.

The Homeowners and Tenants United PAC has raised $40.20 million to support Prop 21 while Five PACs, including Californians for Responsible Housing, has garnered $73.41 million in opposition to the initiative.

“In the past year, California has passed a historic version of statewide rent control – the nation’s strongest rent caps and renter protections in the nation – as well as short-term eviction relief,” said Newsom. “But Proposition 21, like Proposition 10 before it, runs the all-too-real risk of discouraging availability of affordable housing in our state.”