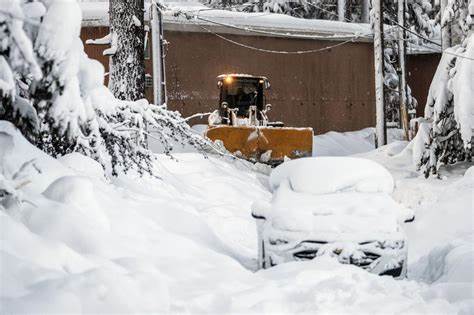 SACRAMENTO, Calif. (AP) — Northern California residents are bracing for another round of powerful storms this week after flooding from a New Year’s Eve deluge killed one person, prompted the evacuation of more than 1,000 inmates in a county jail and washed away a section of a levee system that protects mostly rural farmland.

In south Sacramento County, crews rushed to repair a 200 foot (60.96 meters) section of a roughly 34 mile (54.72 kilometers) levee system along the Cosumnes River that protects just over 53 square miles (137.27 square kilometers) of mostly vineyards and cattle ranches. Crews hope to finish repairs before the next storm is forecasted to hit on Wednesday. If they can’t, they’ll seal whatever progress they have made with plastic and sandbags and hope for the best.

A weather phenomenon known as an “atmospheric river” dumped up to 5 inches (12.70 centimeters) of rain in the Sacramento region and up to a foot (30.48 centimeters) of snow in the mountains on Saturday, said Eric Kurth, a meteorologist with the National Weather Service.

More rain was expected to move into the area Monday night. Another powerful system is expected Wednesday and Thursday that could bring up to 3.5 inches (8.89 centimeters) of rain in the Sacramento Valley and up to 3 feet (0.91 meters) of snow in the mountains along with wind gusts of up to 50 miles per hour (80.4 kilometers per hour).

Then another storm is forecasted to hit the area this weekend, with forecasters anticipating up to 2 inches (5.08 centimeters) of rain in the valley and snow of up to 2 feet (0.61 meters) in the mountains.

In the San Francisco Bay area, a National Weather Service forecast warned Wednesday’s storm could cause widespread flooding and power outages, calling it “truly a brutal system that we are looking at and needs to be taken seriously.”

The Wilton Rancheria tribe said flood waters threatened to disturb ancestral burial sites along the Cosumnes River and asked the public to report to them any sightings of washed up artifacts or remains, but to leave them undisturbed. Unlike most major California rivers, the Cosumnes River is not dammed, meaning there is no basin to collect excess water during major rain events.

“We’re just kind of at nature’s mercy,” said Mark Hite, a member of the board for Reclamation District 800 that oversees the levee system.

Residents on Monday were still drying out from Saturday’s storm, which prompted officials to order the evacuation of the Point Pleasant Community near the Cosumnes River in South Sacramento County. That included 1,075 inmates plus staff at the Rio Cosumnes Correctional Center, who evacuated as a precaution though the jail had not flooded. Inmates were taken to nearby jails with no timetable for their return, according to Sacramento County Sheriff’s Department spokesperson Amar Gandhi.

Emergency crews rescued motorists on New Year’s Eve into Sunday morning. On Sunday they found one person dead inside a submerged vehicle near Highway 99, Dan Quiggle, deputy fire chief for operations for Cosumnes Community Service District Fire Department, told The Sacramento Bee. Highway 99 was closed for much of the day Sunday, but has since reopened in both directions

In Southern California, several people were rescued after floodwaters inundated cars in San Bernardino and Orange counties. No major injuries were reported. The rain stopped just in time for the annual Rose Parade, but rain did fall during the Rose Bowl college football game between Utah and Penn State.

To the north in the state’s capital, crews cleared toppled trees from roads and sidewalks, and at least 5,347 customers still lacked power Monday afternoon across Sacramento County, down from more than 150,000 two days earlier, according to a Sacramento Municipal Utility District online map.

The rain was welcomed in drought-parched California as the past three years have been the state’s driest on record. Most of the state’s major reservoirs were still well below their historical averages. The one exception was Folsom Lake near Sacramento, which was at 153% of its historical average on Sunday.