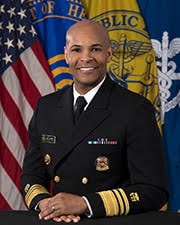 “Don’t wash your dirty laundry in the street,” goes the centuries-old African-American adage. The saying is a warning to Black people: Don’t get into spats with other Black people about racial differences while “in mixed company.” That’s code for White people.

But at a White House Coronavirus Task Force press conference last week things got a little heated. An exchange between a Black Journalist and the country’s top doctor went there — touching on African-American culture and racial stereotypes in a very public way. Big Mama may not have approved.

At the briefing held to update Americans about the global Coronavirus pandemic, U.S. Surgeon General Dr. Jerome Adams, who is African American, probably didn’t think he would  set off a controversy when he said people of color should avoid drugs, tobacco and alcohol as a safety precaution against the coronavirus.

Moments later, Yamiche Léone Alcindor, a Black White House correspondent for PBS NewsHour, fired a pointed question at Adams. She asked him if his comment was an attack on African Americans.

“There are some people online who are already offended by that language and the idea that behaviors may be leading to these high death rates,” Alcindor told Adams.

Adams apologized, but he said that he used language he uses around his family.

But Alcindor  continued pressing Adams, “Could you, I guess, have a response to those who might be offended by the language you used?”

“Some will find this language offensive after Adams stressed that behavior was not the issue for why more black [people] are dying,” Alcindor tweeted from the press conference.

“We need targeted outreach to the African-American community,” Adams responded to Alcindor. “I used the language that I used in my family. I have a Puerto Rican brother-in-law. I call my grandaddy, ‘granddaddy.’ I have relatives who call their grandparents Big Mama. So that was not to be offensive.”

Adams is the 20th U.S. Surgeon General. He oversees 6,500 uniformed officers who serve almost 800 locations around the globe charged with promoting, protecting, and advancing the health and safety of the United States.

Adams grew up on a farm in Maryland, the Baltimore Sun reported in 2017. He assumed the office of Surgeon General of the United States on Sept. 5, 2017.

Dr. Anthony Fauci, one of the leading experts on infectious diseases and a member of the task force, defended Adams’ remarks.

“I know Jerome personally,” Fauci said. “I can testify that he made no — not a hint of being offensive at all with that comment.”