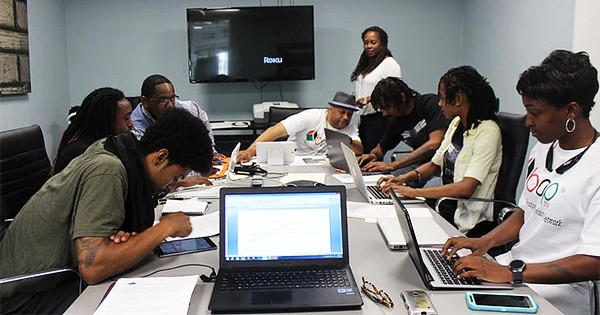 Nationwide — BOP TV is on a mission to create spaces in Black communities across the country that would train and develop Media, Arts, & Technology creatives. Within this mission is the power to air creatives’ work on BOP TV so they may generate revenue and drive entrepreneurship in one of the new areas of media technology. To gain this new space, they are requesting help from the community. Therefore, they have officially kicked off an Indiegogo Crowdfunding Campaign.

BOP TV seeks a new home to accommodate their growth and productions to also address important issues through fresh content. The home is a building that will permanently provide a great facility to support their team of professionals that work in Media, Arts & Technology, Training, and productions. This building has been provided within an agreement by a school district and is currently under contract by BOP TV. Having this new building through their Indiegogo Campaign will help them to continue fulfilling the dreams of aspiring actors, producers, writers, crew, and production members.

“We need your help on the down payment of this building to help us grow and fulfill all the dreams, aspirations, and goals that we have to expand the network in a permanent facility,” said B. Scott Thompson, VP of Production/Supervision.

Scott has been a part of the BOP TV family for several years along with many other team members. Scott and their CEO, Michael Campbell, will have lots of new stories to share with their community and team once they begin work within BOP TV’s new building. Therefore, when you click on the campaign link (herein), you will not only be able to help them buy their new building but experience a variety of amazing perks for your contribution, including 50 commercial spots to promote your business on BOP TV!

Black on Purpose Television Network (BOP TV) is the largest African-American-owned television network in the world streaming content to millions. With 32 plus channels and thousands of shows, BOP TV is the place to watch positive images of people of color, free of negative stereotypes. They give content creators and those with ideas a real opportunity for exposure, brand growth, and revenue building. They also give businesses an opportunity to advertise directly to people of color, keeping their dollars circulating within their community.

BOP TV re-purposes old school buildings in Black communities and turns them into production studios and training centers for Media, Arts & Technology. This creates jobs, business incubation, training, and the preservation of historically Black communities through affordable real estate development. The company believes that profit comes as a reward for the good works done for people and communities. Visit BOPTV.com

Michael Campbell is the President and CEO of Black on Purpose Television (BOP TV) Network. Michael has vehemently positioned BOP TV as a leader within African-American-owned streaming television and continues to set the bar with the BOP TV ROKU app. In addition to his current position as CEO of BOP TV, Mr. Campbell also serves as a voting member of the recording academy (The Grammy’s) and CEO of a record label with a state-of-the-art recording studio.

Mr. Campbell was the only African-American member of the first streaming media consortium group in 1994. This group of technology professionals was one of many that helped pave the way for today’s streaming technology. Mr. Campbell’s knowledge spans streaming media, music production, audio engineering, composition, content creation, film, television, and other areas of entertainment that have earned him numerous awards. Moreover, Mr. Campbell is looking to form partnerships with companies interested in establishing or growing their brand.