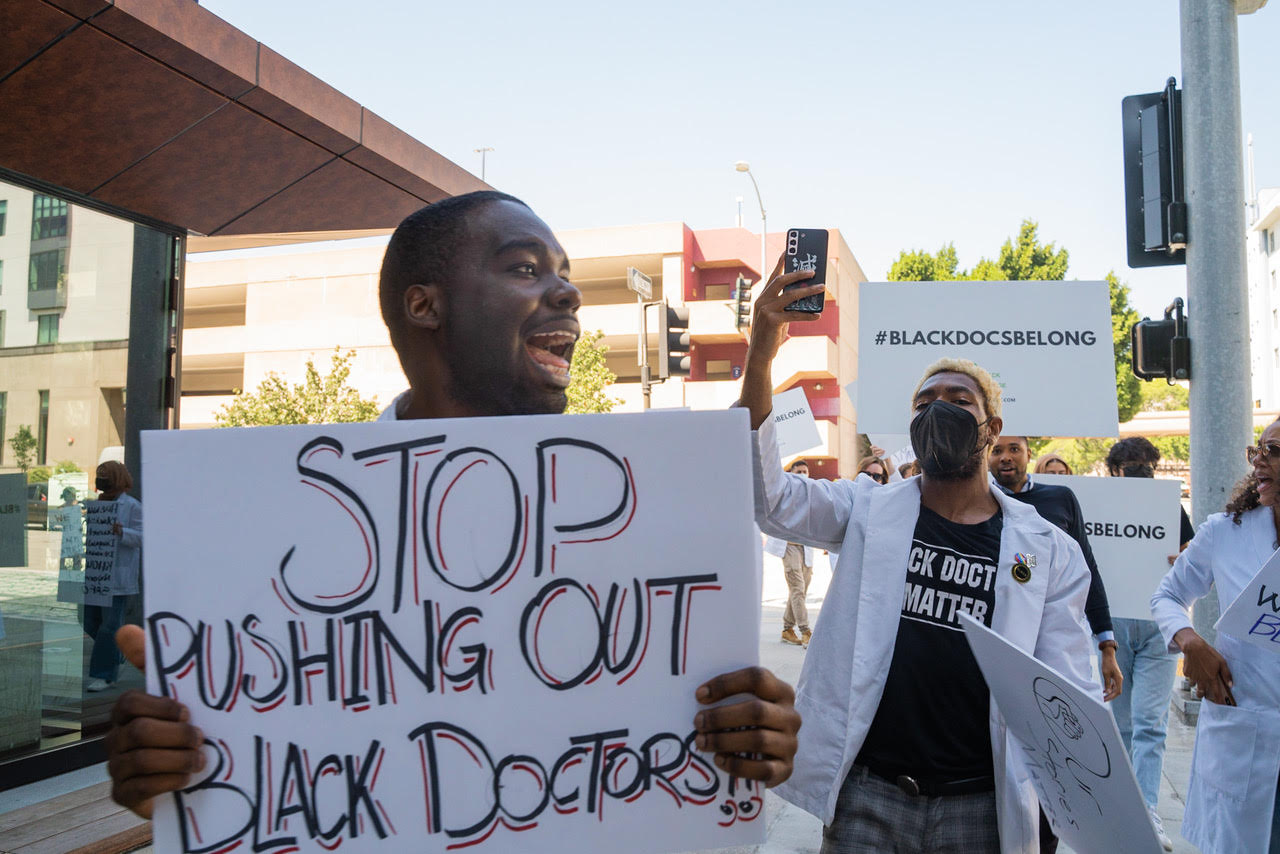 The #BlackDocsBelong campaign held a rally in Pasadena last Friday calling on Black medical doctors to join their movement dedicated to keeping and growing the ranks of Black physicians.

“We actively support and advocate for Black trainees and physicians facing workplace discrimination,” states the website of Black Doc Village, the group organizing the rally. “We aim to expand the Black physician workforce to improve health outcomes in the Black community.”

About 100 young medical students and staff gathered to march to the Kaiser Permanente Bernard J. Tyson School of Medicine. A wide range of ethnicities came to provide support.

A student who chose to remain anonymous shared the contents of a message about the protest from the Kaiser School of Medicine.

“Students who choose to participate in the demonstration tomorrow will not be penalized or retaliated against for doing so,” reads an email by senior associate dean for student affairs Dr. Anne M. Eacker, “and absence from class or clinical sites tomorrow morning will be considered an excused absence.”

With handmade signs and white lab coats the rally set off for a two-block march to the medical school. Walking in a single file line the doctors raised their voices in a shouted call-and-response chant.

“Stop pushing,” they shouted followed by the comeback, “Black docs out.”

Black medical professionals from across the country came to support the Black Doc Village rally.

Dr. Robert Rock, who practices on the East Coast, says he was inspired to go into medicine by his grandmother and the strength she exhibited when she “refused to be disrespected” by medical professionals during her care. He witnessed a racist act aimed at a patient which he described as shocking.

“We were deterred from talking about it,” said Rock. “It was then that I lost my faith (in the system).”

Jessica Isom is a Boston-based psychiatrist and an advocate for equity and justice for BIPOC patients. She has been an outspoken resource and advisor in Diversity, Equity and Inclusion programs through her company Vision for Equality, which has worked with several major brands and medical institutions. She sees part of the issue as a flaw in the culture of medicine which makes changing it difficult.

Isom says resistance to change is “perpetuated through training” and that people may not be conscious that change is needed. She referred to an article written by Rhea W. Boyd, a pediatrician who has spoken before Congress about racism in the medical profession.

Doctors were not the only ones who want more Black physicians and medical professionals in the industry. Robert Phillips was looking for a Black nephrologist, a doctor specializing in diseases and functions of the kidneys and found Dr. Grubbs. He felt ignored and unheard by White doctors.

Scores of studies show that health outcomes for African Americans have historically been among the lowest, according to various metrics. The Centers for Disease and Prevention (CDC) recently reported African Americans have the highest rate of infant mortality of any ethnic group. The number of Black doctors is also disproportionately low, at just 5 %, according to a 2019 survey by the Association of American Medical Colleges.

Some at the rally are in litigation against Kaiser, including Khoury. She is well-known for a viral thread on Twitter relating her story of how she was removed from Kaiser Medical School.

“Regarding Dr. Aysha Khoury, one of the founders of the Black Doc Village organization, the school has been clear that Dr. Khoury was not placed on leave because she brought content related to anti-racism to the classroom or because she shared her experiences as a Black woman in medicine,” the Kaiser statement says.

Khoury and Grubbs say that issues with Kaiser are a small part of a bigger problem in the medical community and are hoping that their stories can be the jumping-off point for action.

“Kaiser is where we are today, but this is everywhere, not just there,” said Khoury. “This is why we need the whole village.”