Bill to End “Slavery” in Prisons Advances in Cal Legislature 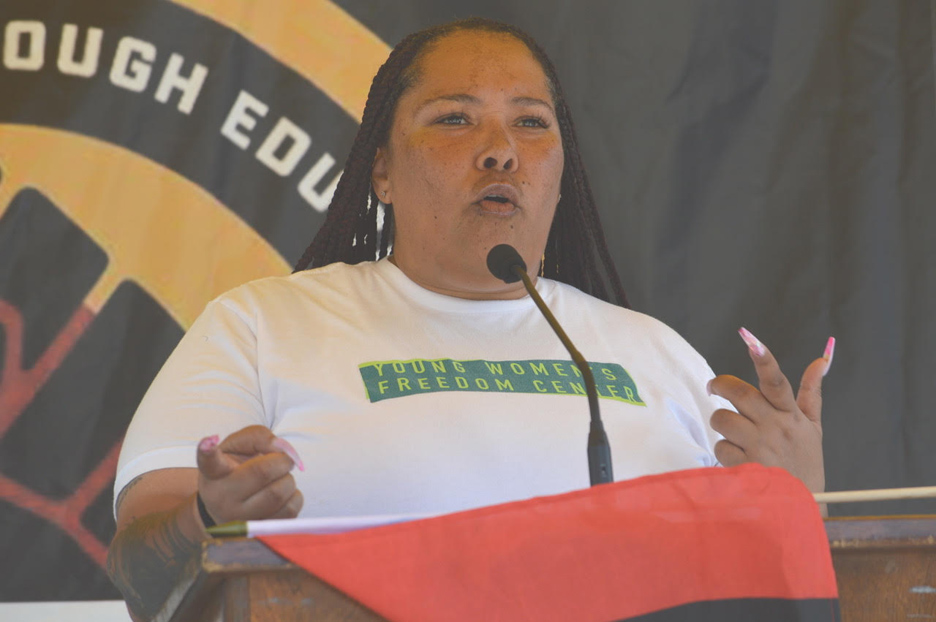 Statewide — April Grayson, a policy associate for the Young Women’s Freedom Center and a formerly incarcerated Black woman, who spent 17 years behind bars, said she can’t wait to see the day when the language in Article 1, Section 6 of California’s Constitution is off the books.

It says, “There shall be no slavery in this state; nor involuntary servitude, unless for the punishment of crime,” California’s Constitution states.

Grayson, who was imprisoned at Central California’s Women’s Facility in Chowchilla, spoke recently at a Juneteenth rally at the state Capitol in Sacramento in support of Assembly Constitutional Amendment (ACA) 3.

“Today, can we abolish a system that was only created to keep Black people incarcerated?” Grayson said.

The legislation authored by Sen. Sydney Kamlager (D-Los Angeles) would strike out all conditional language and prohibit involuntary servitude for all purposes in the California penal system.

“Slavery has no place in our state constitution. Full stop. And yet, that’s where we are. I’m excited ACA 3, which aims to abolish slavery and involuntary servitude without exception, continues to progress and is currently in Assembly Appropriations,” said Kamlager in a statement to California Black Media.  “There’s no time like the present to dissolve the vestiges of racial inequality and modern-day slavery.”

On June 15, ACA 3 – also known as the California Abolition Act — went before the Assembly’s Public Safety Committee. It passed 7-0 and has since been referred to the Assembly’s appropriations Committee for review.

After a hearing June 30, the appropriations committee referred ACA 3 to the “suspense file,” where it is undergoing a review to determine its impact on the state budget.

Shay Franco-Clausen is a prison reform advocate and was a co-organizer of the rally in Sacramento.  She told California Black Media it is “crazy that current language is still in the California Constitution in 2021.”

“If we don’t see it as Californians to have this immoral, barbaric, Jim-Crow language, that is still oppressive by way of forced labor, still there in our state’s constitution, we have a problem,” said Franco-Clausen, who was incarcerated for nearly two years as a juvenile.

“ACA 3 removing this discriminatory language is one step in the right direction to a California that represents everyone,” she continued.

Inmates earned between 8 and 37 cents per hour on average for regular prison jobs, according to an April 2017 report released by the Prison Policy Initiative (PPI), a nonprofit research and advocacy campaign that addresses criminal justice reform and mass criminalization.

These jobs, PPI stated, on average, require seven-hour workdays for 22 days per month. California inmates averaged about $12.00 to $56.00 per month for part-time and full-time positions, the PPI report reveals.

The prison system’s “regular jobs” include all work provided and paid for by state correctional agencies, except for industry jobs. Those jobs directly support the correctional institutions operations with custodial, maintenance, sanitation, grounds keeping and food service work.

Working in jobs providing labor to institutions outside of the prison system, California inmates averaged between 30 and 95 cents per hour. Known as the “Correctional Industries,” those jobs include assignments producing goods and services that are sold to government and non-profit agencies.

“Making it hard for incarcerated people to earn real money hurts their chances of success when they are released, too,” Wendy Sawyer, a PPI policy analyst wrote in a 2017 report. “With little to no savings, how can they possibly afford the immediate costs of food, housing, healthcare, transportation, child support, and supervision fees?”

The Public Policy Institute of California (PPIC), a nonprofit think tank dedicated to informing and improving public policy in California, reported that the total number of Black inmates is disproportional to the state’s total population of African Americans, which is 6%.

The Assembly Public Safety Committee yes vote last week was the first step in the legislative process to ACA 3 becoming law in California. If both the Assembly and the Senate approve the proposal, it would be placed on the ballot in 2022 for all California voters to approve or reject it.

“We should not be privatizing any labor in our prison system because (prisoners) have committed a crime,” Franco-Clausen said. “We already know that Black and Brown people are criminalized at the highest level. The book is thrown at us. I still don’t understand why we still use forced labor.”