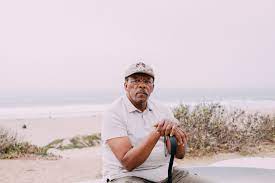 By: Danny Hajek, A Marinez, and Kelley Dickens, NPR

Manhattan Beach, CA — Duane “Yellow Feather” Shepard stands at the top of a narrow park that slopes downward toward a lifeguard training center and panoramic views of the Pacific coast.

For Shepard, this oceanfront park known as Bruce’s Beach — located in Manhattan Beach, Calif., just south of Los Angeles — holds a painful history. “This is the land that our family used to own,” he says.

Shepard’s ancestors, an African American couple named Charles and Willa Bruce, owned this land a century ago. The couple built a beachfront resort called Bruce’s Beach Lodge in 1912 and welcomed Black beachgoers with a restaurant, a dance hall, and changing tents with bathing suits for rent.

But the Bruces were run out of Manhattan Beach and forced to shut down their successful resort. Their property was seized by the city, and they lost their fortune. For years, the land was owned by the county of Los Angeles — until last month, when California passed a law that allowed the property to be transferred back to the couple’s descendants.

The historic Bruce’s Beach case is inspiring social justice leaders and reparations activists to fight for other Black families whose ancestors were also victims of land theft in the United States.

Shepard, a cousin of the direct descendant of Charles and Willa Bruce, says Bruce’s Beach offered a refuge for Black patrons during the Jim Crowe era.

“There weren’t many areas where Black people could get into the water along the entire coast of California at that time,” Shepard, 70, tells NPR. He’s a clan chief of the Pocasset Wampanoag Tribe of the Pokanoket Nation.

“[Bruce’s Beach] was a place where people could have social functions,” he says. “You had Black entertainers, actors and actresses, jazz artists, Black politicians as well as business owners and socialites.”

However, some white residents of Manhattan Beach feared an “invasion” by the African American community, according to local historian Robert L. Brigham’s 1956 Fresno State master’s thesis Land Ownership and Occupancy by Negroes In Manhattan Beach, California. White residents set up barricades to keep Black beachgoers from getting to the ocean, and the Ku Klux Klan, active along the California coast, reportedly planned attacks against the Bruce’s resort.

“They slashed tires, they burned mattresses under the porch of the resort, they tried to blow up a gas meter of one of the residents here,” Shepard says. “They had 24/7 phone campaigns and made threats against Willa and her family.”

The city of Manhattan Beach seized the resort

In November 1923, a white realtor named George H. Lindsey approached Manhattan Beach’s Board of Trustees with an option to condemn Bruce’s Beach through the Park and Playground Act of 1909, according to an April 13, 2021 report by the Bruce’s Beach Task Force, a resident-led task force appointed by the Manhattan Beach city council last year.

By 1924, Manhattan Beach city officials invoked eminent domain, claiming the city would build a public park over 30 lots, including the Bruces’ land and four other lots owned by African American families.

Bruce’s Beach resort was shuttered and demolished, and the property sat vacant for decades. Willa and Charles Bruce requested $120,000 for both damages and the value of their property, but the city granted them $14,500.

Today, the two parcels of land are worth an estimated $75 million.

On Sept. 30, California Gov. Gavin Newsom signed SB 796, authorizing the county to transfer the land back to the Bruce family after nearly 100 years.

On Tuesday, the Los Angeles County Board of Supervisors voted unanimously to begin the process of transferring the land. That process will also include confirming the Bruce’s rightful heirs.

“Today, we’re making history,” Newsom said at the ceremony held on Bruce’s Beach. “I’m proud to be here, not just for the descendants of the Bruce family, but for all of those families torn asunder because of racism.”

Bruce’s Beach stands as just one example of land theft that’s taken place across the United States through violence, intimidation and legal maneuvers. For generations, Black landowners like Willa and Charles Bruce have been victimized by eminent domain abuse and unjust property laws.

“One of the reasons why the Bruce’s case has been generating so much attention is because it represents the first instance in the history of the United States where an African American family or community that had their property taken unjustly, ended up having it returned,” says Thomas W. Mitchell, a property law scholar at Texas A&M University. He’s worked to reform discriminatory policies that have stripped African Americans of their land.

Mitchell is part of a research team called the Land Loss and Reparations Research Project, which is trying to put an economic value on agricultural land unjustly taken from Black farmers over the last hundred years.

“Our research team has come up with a preliminary estimate of $300 billion,” Mitchell says, noting that it only accounts for the farm land itself. “We’re also going further and saying that as a result of losing this land, we lost the ability to benefit from the land ownership in terms of families getting loans to send their children to college, which then has a negative impact on economic mobility — and that’s just Black farmers.”

Mitchell estimates the total loss of generational wealth for Black Americans across the U.S. falls into the trillions.

But families such as the Bruces whose property was taken generations ago don’t have legal recourse to get their land back, Mitchell says. Statutes of limitation restrictions prevent families from successfully filing lawsuits.

Mitchell points to the Tulsa Race Massacre of 1921 in Tulsa, Okla., when white mobs tried to destroy what was known as Black Wall Street.

Bruce’s Beach had a different outcome because the government actually stepped in to make amends for a historical wrong. The California legislature passed a law allowing for the land to be given back to the Bruce family, making it a unique case.

“Is the Bruce’s Beach case a recognition that the time has come for real racial justice in this country?” Mitchell asks. “Can this serve as a template for providing effective redress to other African American families who have had their property taken unjustly? We’ll see.”

Activists are trying to help other Black families reclaim their land

During the signing ceremony in Manhattan Beach, Newsom recognized activist Kavon Ward as the driving force behind the Bruce’s Beach movement. Advocating for the Bruce family led to the founding of her organization called Where Is My Land, dedicated to helping Black Americans reclaim stolen land and secure restitution.

“I informed the [Bruce] family that I would do anything in my power to help them,” Ward, 39, tells NPR. “Not only to get restitution for their loss of civil rights — their loss of business enterprise, but for me, I felt like justice was getting their land back.”

At about the same time on the opposite coast, in Philadelphia, Pa., 43-year-old Ashanti Martin was on a similar mission. The two were introduced through a mutual friend — and together, Ward and Martin co-founded Where Is My Land. Both say they were compelled to take action after the murder of George Floyd on May 25, 2020.

Through their organization, Martin and Ward are fielding dozens more requests from African American families across the U.S., hoping to reclaim their land.

“I don’t think that we can handle all of this within my lifetime,” Ward says. “It took a long time for the land to be stolen — it didn’t happen overnight. And so getting it back is going to take even longer because there’s so many obstacles and road blocks in the way. And so the only thing we can do is to make sure we’re dealing with this, one family at a time.”

As for the Bruce family, they say they won’t move to Manhattan Beach or build on the land that’s now being returned to them. Instead, they’ll rent the lifeguard training center back to the County of Los Angeles.

Shepard, their descendent, says reclaiming Bruce’s Beach was just the first step. Now, he says his family will continue their fight for restitution for the loss of revenue over the past 97 years.