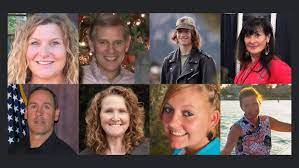 Boulder, CO — After a brief halt, caused by the coronavirus lockdown, America has resumed its all too familiar regime of regular gun massacres. According to The Washington Post, the COVID-19 outbreak barely dented gun deaths. 20,000 people died from gun violence in 2020, according to data from the Gun Violence Archive. Another 24,000 people died from suicide by a gun.

The violence has restarted again. The nation is still reeling from the Atlanta murders which saw eight people killed by a gunman who claimed he wanted to eliminate sexual temptation. Now the Boulder, Colo. area has been hit by a gun massacre that killed 10 people, including a police officer who responded to the scene.

According to news reports, the shooter is Ahmad Al Aliwi Alissa, a Syrian immigrant who was brought to America at the age of two. Right-wing news sources initially shied away from the story. FOX News refused to cover it, but as soon as the gunman’s ethnicity was revealed, right-wing sources tried to spin it into an Islamic terrorism story. However, according to news report Alissa, was raised in America and the disaster sounds like a typical American gun tragedy story.

According to a CNN story, Alissa suffered from paranoia and often complained of people following him. In high school, he was bullied because of his ethnic background but was also known for having a temper, so students left him alone. He was accused of assaulting a high school student who racially abused him. Alissa was said to be a loner and had little social life.

“The brother told CNN on Tuesday that in high school bullies made fun of Alissa’s name and for being Muslim and that may have contributed to him becoming ‘anti-social,’” said CNN. “’People chose not to mess with him because of his temper, people chose not to really talk to him because of all — how he acted and things like that. So yeah, he was very alone,’ said Damien Cruz, who said he has known Alissa since the fifth grade.’”

But he was obsessed with guns. That turned out to be an all too familiar deadly combination.

CNN stated that Alissa carried out the shooting with a modified AR-15 style pistol and also wore a tactical vest. He was eventually subdued when he was shot in the leg by police. By the time, Alissa was arrested, he had stripped down to his underwear.

Now both political parties have retreated to their familiar camps in terms of how to address the issue of mass shootings. Democrats are demanding action and want to use legislation to reduce gun deaths.

President Joe Biden has stated that he will take executive action if Congress fails to act.  During his address to the nation, Biden called on the Senate to pass legislation that would expand background checks and ban assault weapons.

“I don’t need to wait another minute – let alone an hour – to take common-sense steps that will save the lives in the future, and I urge my colleagues in the House and Senate to act,” said Biden in a White House speech.

White House spokesperson Jen Psaki said the president was considering issuing executive actions over the issue, according to Reuters.

Republicans are following their familiar script by calling for holy intervention and sticking to the personal responsibility theme.

“We have a lot of drunk drivers in America that are killing a lot of people. We ought to try to combat that too. But I think what many folks on my side of the aisle are saying is that the answer is not to get rid of all sober drivers. The answer is to concentrate on the problem,” said Kennedy.

CNN anchor Jake Tapper responding by saying: “I don’t even know what to say to that, it’s so stupid.”

But the current mood has forced some pro-gun members of Congress to change their tune. Colorado Rep. Lauren Boebert has drawn headlines for her obsession with guns. She claimed she would refuse to follow Washington, D.C. strict gun laws and tried to bring her side arm into the chambers of Congress. She was also pictured on a Zoom call with a gun shrine in the background.  However, Boebert removed the gun shrine in a recent call.

Just hours after the shooting she tweeted, “My prayers are with the shoppers, employees, first responders & others affected by the shooting in Boulder.”